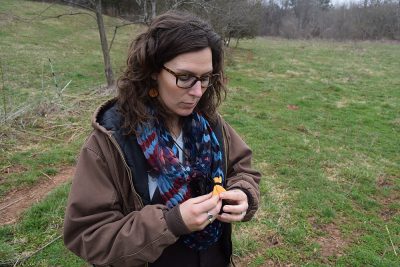 Carolyn wears a pouch of earth from the Standing Rock water protectors’ camp around her neck to remind herself of the strength of the land. Photo by Kevin Ridder

It’s unusual for Carolyn Reilly to be at her 58-acre family farm all winter. With early March being a quiet time of year, she would have liked to leave the farm in the hands of her parents for a few days to take a trip with her husband and kids. But with the constant threat of Mountain Valley Pipeline land surveyors showing up unannounced and unwanted on their property, Carolyn fears to leave for even a short time.


“We’re pretty much held hostage of our own accord because we want to be watchdogging, watching our land,” she says.

“They don’t come down the drive,” Carolyn says. “They come through the woods, crossing the creek. … They just show up and start doing it.”

Carolyn, her husband Ian and her parents Betty and Dave co-own Four Corners Farm in Rocky Mount, Va. After living in Florida for most of their lives, Carolyn and Ian became tired of their unfulfilling jobs. So in 2010, they sold many of their possessions and lived in a camper with their four children for six months before settling on their new home and starting their community-focused organic farm with Carolyn’s parents.

The land holds a special place in the family’s hearts — three of the Reilly children were baptized in the creek behind their home. 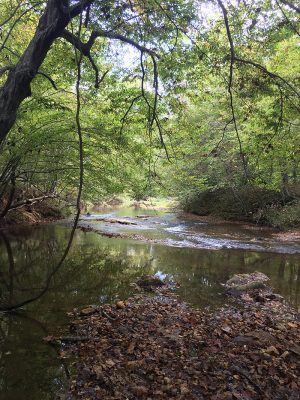 Workers plan to bury a pipeline under this creek behind the Reillys’ home. Photo by Carolyn Reilly

“We used to teach classes here,” Carolyn says. “We had skill-sharing things and monthly dinners building community and relationships around local food.”

In the fall of 2014, they received a phone call from land agents representing Mountain Valley Pipeline, LLC, informing the Reillys of their plan to bury a 42-inch fracked-gas pipeline in the family’s creek and cut a quarter-mile swath through prime pasture 800 feet from the house.

When the company offered $50,000 for the pipeline’s right-of-way, the family refused.

“How does that offset the loss of property value for trying to sell?” Carolyn asks. “We still have a mortgage. It felt insulting.” 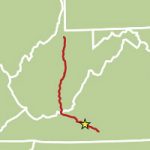 The Reillys’ location in the path of the Mountain Valley Pipeline.

“I’ve been working and trying to organize folks to get information and feel empowered by that knowledge,” she says. “That’s become a big focus for our family, and for me in the last three years, and it’s taken me away from our first reason of why we moved here.”

On March 2, a federal judge ruled that Mountain Valley Pipeline can seize 300 people’s land, including the Reillys’, through eminent domain.

“They’re spending all this money now just tearing things up near communities and homes,” Carolyn says. “And there is no say in any of it for the people who will have to deal with it and live next to it.” — By Kevin Ridder

UPDATE: On April 19, three tree-sits were established by self-described “young Virginians” at Four Corners Farm. In a statement, Ian Reilly said, “Launching Little Teel Crossing is an act of protection for our family’s home, land and water. This farm has been free from chemicals for decades. As farmers seeking to renew the land, we intend to keep it that way.” Read more from Friends of Nelson here.