Of all the places on the map that Bill and Lynn Limpert could have chosen to build their retirement retreat, they chose a barely level spot on 120 acres of steep land in the rugged mountains of Bath County, Va. 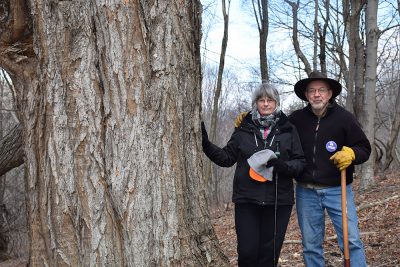 The Limperts stand beside an iconic sugar maple on their land. Estimated to be more than 300 years old, the tree is in the direct path of the Atlantic Coast Pipeline. Photo by Cat McCue

The views are beautiful, but it was the trees that drew the couple to the land in 2009 — a vast old-growth oak and hickory forest, including rare virgin stands. It’s so special, the state Department of Conservation and Recreation has designated the area Little Valley Slope Conservation Area.

The proposed Atlantic Coast Pipeline would bisect the area, gouging a wide swath more than 3,000 feet across the Limpert’s property. Among the first trees to go would be the 15-foot-circumference sugar maple, about 300 to 400 years old. From his deck, Bill points to the route as it would run from a distant ridge, drop into Little Valley, then climb a ridge to within 600 feet of their home and on up the mountain behind them where the slopes average between 39 and 66 percent. 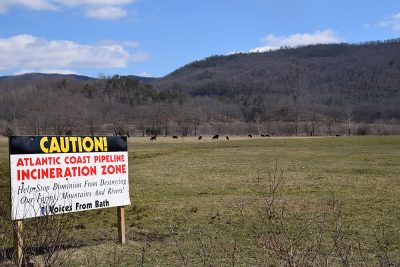 There is no way the pipeline can be built without inflicting serious damage on water resources, says Bill. He should know — he was an environmental regulator for almost 30 years at the Maryland Department of Environment. “I can say without equivocation, these are the worst erosion and sediment control plans I’ve ever seen for any large construction project.”

The Limperts first heard about the Atlantic Coast Pipeline in 2014. They weren’t directly impacted, but attended meetings and wrote letters in opposition. Then they got the letter from FERC saying it would cross their land due to a re-route. “February 12, 2016,” they recall in unison. “It was such a shock, such a nightmare to see that letter. And it’s been a nightmare ever since,” says Lynn. 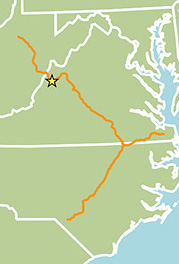 The Limperts’ location in the path of the Atlantic Coast Pipeline.

Bill works every day fighting the pipeline. Over the past two years, about 150 students, researchers and activists have come to hear their story. They have scrambled up steep slopes to document landslides, a not infrequent occurrence in these parts. They have traveled to Richmond to make their case, most recently in March to meet with the Virginia Secretary of Natural Resources.

“We’re still hoping for a miracle,” says Bill, and Lynn chimes in with a laugh: “Why not?” But if it goes through, they will leave and put the house on the market, knowing they’ll get a fraction of their investment — if it sells. They recognize they are among the lucky, though; they still have their home in Maryland.

“Most other folks can’t move away from it,” says Bill. — By Cat McCue