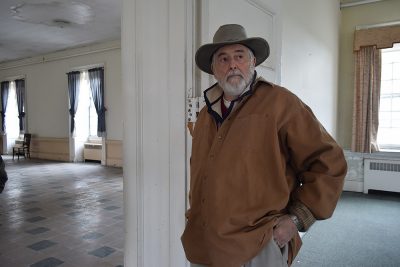 Ashby Berkley stands inside Sweet Springs Resort in Monroe County, W.Va. His plans to renovate the building are muddied by fears of pipeline construction depleting its renowned natural springs. Photo by Kevin Ridder

When Ashby Berkley talks about why he’s fighting the Mountain Valley Pipeline, the fact that pipeline developers are using eminent domain to cut through the land he’s owned for 50 years is almost an afterthought — not to say he isn’t upset about it.

While his actual home is a half-mile away, he owns two rental houses on the Summers County, W.Va., property by the Greenbrier River and had plans to install a boat dock and upscale camping ground — but not anymore.

If the worst happens and the pipeline explodes, the property — which he values at $535,000 — would be annihilated. Before the company used eminent domain to seize the right-of-way, they offered Ashby $34,000, which he promptly refused.

“It just completely destroys my property,” he says. “I will not run a commercial campground on top of that pipeline. I don’t think anybody would want to stay over a place that could blow.” 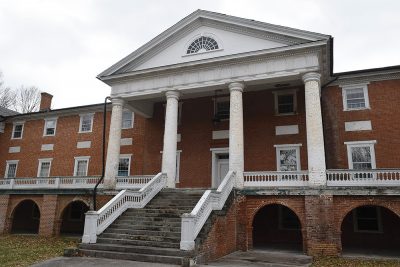 What concerns him most is potential damage to the region’s underground network of sinkholes and caves, or karst terrain. Ashby recently purchased and plans to renovate Old Sweet Springs, a resort founded in 1792 in present-day Monroe County, W.Va. The resort was named and widely known for its warm, naturally carbonated artesian springs — George Washington even visited. And while the resort is around 40 miles from the pipeline’s route, the source of the natural springs is unknown. 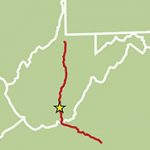 Ashby Berkley’s location in the path of the Mountain Valley Pipeline.

Ashby worries that the pipeline or any fracking it might attract to the area could potentially pollute or even deplete the springs’ aquifer, not to mention the rest of the county’s water.

“If they break through that top rock and the bedrock, the water could just go right on down into the earth and be gone,” he says. “We’d have no way of getting it back. It’s a serious thing. … This is the Earth we live on. Where are we going to live when they screw it up? And if one generation doesn’t fight for the next generation, we’ve certainly lost our total reasoning and cause.” — By Kevin Ridder