Calls for Action on RECLAIM Act

In October, Jim Ward, the judge executive of Letcher County, Ky., spoke at a press conference in Washington, D.C., joining legislators from both sides of the aisle to call for passage of the RECLAIM Act. 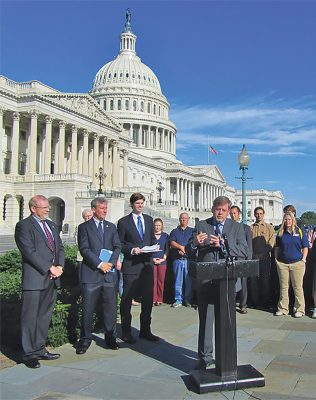 The bill, which passed the House Natural Resources Committee in June, would accelerate the disbursement of $1 billion currently in the Abandoned Mine Land fund over a five-year period. Committee members also approved an amendment to require projects that receive funding under the bill to spur local economic development.


“We need to use this money strategically so that with the economic development part, not only do we reclaim the land but we also create jobs, and future jobs, something that’s sustainable,” Ward told the Washington, D.C., audience. “Because we’re looking at having to diversify our economies and this money could really put our people back to work.”

Ward had traveled to the capital along with RECLAIM Act supporters from across the country to urge legislators to cosponsor the bill and hold a vote before the end of 2017. Appalachian Voices, the publisher of this newspaper, helped organize the citizen lobby week, which included nearly 60 congressional meetings.

Citizens also called on the Senate to adopt the House’s version and hold its own vote. Currently, the Senate version does not require that the abandoned mine land projects eligible for RECLAIM Act funding also boost local economies.

“It’s Democrats and Republicans coming together to identify a way that we can be helpful, help the country, help make the environment better, help create jobs and [help] people who are skilled but want to stay living in the mountains be able to stay there and pursue something different as we move forward in this country,” Griffith said at the press conference.