What took nature millennia to create, greed destroyed in a mere century. The coal industry has devoured more than 500 thickly forested mountaintops in Central Appalachia, costing the most biologically diverse ecosystems outside of the Amazon Rainforest more than a million acres. The disfigured geography, pollution and excess sedimentation fouled the once-pristine mountain streams or obliterated them completely.

The coal industry is declining, but ugly scars remain — visible even from space — and the mountains’ ecosystems are often too severely damaged to heal themselves. Across the region, communities and government agencies are searching for ways — and money — to undo the damage. 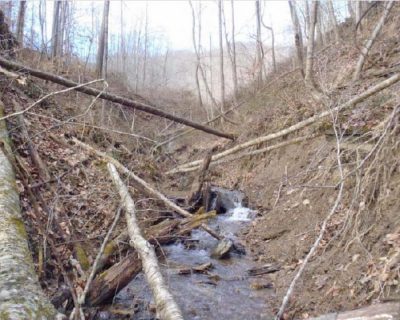 A small nonprofit in West Virginia recently completed what it says is one of the most comprehensive watershed restoration projects in the state’s history. Canaan Valley Institute restored the Lower Dempsey Branch, a tributary of the Guyandotte River, located in Logan County, W.Va.


The project encompassed a 1500-acre watershed subjected to contour mining before a federal surface mining law that requires reclamation of mined land went into effect. Contour mining removes wide swaths of a mountain, forming flat shelves that cut off stream flow. The Lower Dempsey Branch watershed was badly damaged by a contour mining shelf that sliced through 30 headwater streams and altered the flow of groundwater.

The Canaan Valley Institute restored normal hydrologic function to the watershed by reconnecting headwater streams and recreating natural ephemeral streams — transient streams formed by rainfall runoff rather than by groundwater — that had been buried by fill from the mining process.

More than six miles of ephemeral and headwater streams and 51 acres of native vegetation along the waterways were restored. Canaan Valley Institute also removed approximately 25 miles of unused road beds that altered the course of rain runoff and eroded slopes and streams, washing excess sediment downstream.

“We reconnected streams, which spread water across the surface the way its supposed to, absorbing it back into the soil and restoring a more natural water cycle for that watershed,” explains Jennifer Newland, executive director of the institute.

Newland describes it as a holistic approach to stream restoration, rather than just trying to patch a stream to make it work.

“Our designer called it ‘reconnecting the plumbing of the watershed,’” she says.

Streams are interconnected ecosystems with varied features and needs. When planning a restoration, stream designers look to healthy streams with similar geography and habitats to the distressed one and use the information they collect to try to mimic nature.

“We’re trying to make sure that we build streams that are the right size for the size of the valley they’re in, for the slope of the valley,” says Newland. “Steeper headwater streams look very different than a flat, lower valley stream, and they have different widths and different depths.”

Much of the restoration of Lower Dempsey also focused on repairing riparian zones — the natural vegetation growth that buffers stream banks and protects them from erosion — by planting saplings and seeds.

Newland says large trees have disappeared from stream banks due to clearing land for farms and timber harvesting, which means there are no fallen logs in the streams to form habitat for aquatic life. So logs are brought in, adding the debris missing from the system, and saplings are planted to provide future habitat.

The funding stream that makes restoration projects such as the Lower Dempsey possible is often as complex as the streams that are restored. 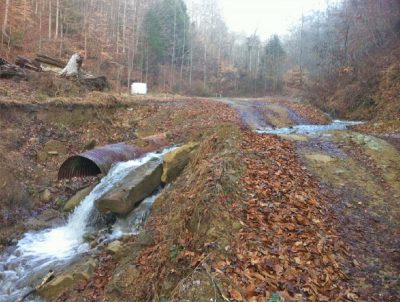 Before restoration, deteriorating roads and culverts disrupted the flow of Lower Dempsey Branch

“It’s not cheap,” says Newland. “One of the most difficult things is that there’s never enough money to do everything that we want to do. We cobble together funding sources from all over the place. Most of the time it’s grants.”

But funding for the Lower Dempsey restoration came from a “model that’s outside of our normal channels,” Newland says: a “mitigation bank” that uses private investment money to restore wetlands and streams in one area as a way to offset the destruction of similar water resources in another area.

Regulators assign a restoration project a certain number of credits. When a company wants to do some kind of development or resource extraction, it submits its plan for review. Their impact on the environment in that location is assessed and they’re assigned a certain number of debits. They pay a private company that’s already paid to have restoration projects done to buy the credits they need to take care of their impacts.

In this case, a company can now purchase credits from Ecosystem Investment Partners, which has already paid Canaan Valley Institute and other organizations for the restoration work in the Lower Dempsey Watershed.

The overall project, including the acquisition of the Lower Dempsey Watershed project property by EIP, resulted in tens of millions of dollars of investment in the area. 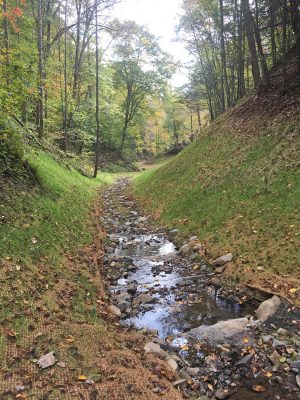 In the restored sections, such as the one at right, seedlings have been planted to provide shade and erosion control for the stream. Photos courtesy of CVI

“It’s a pretty complex system, but it’s actually a lot better than the old system,” says Newland.
Newland says mitigation banks are a win-win, streamlining the process for both companies and the environmental impacts.

“In the past, a company would come in and propose a restoration project they’d either do simultaneously with the impact they were making or even afterwards. If it wasn’t successful, then you have this big delay in actually getting the restoration appropriately done.” She adds, “This way, all of it is done, approved ahead of time, and we know we’re getting good restoration work.”

According to the Canaan Valley Institute website, the organization has completed nearly two dozen restoration projects. Work is currently underway in the Monongahela National Forest, where the institute has been doing restoration for the past nine years.The 40,000 acre project site sits atop Cheat Mountain in West Virginia, which was logged and strip mined in the 1980s.

The Monongahela project includes the restoration of native red spruce forests and reduction of sediment pollution in the Shaver’s Fork River. With help from partners like the U.S. Forest Service, they have decommissioned four miles of unnecessary roads from the tract, created and enhanced wetlands, removed unwanted non-native species, decompacted the soil, replanted native trees and restored streams.

Canaan Valley Institute’s restoration projects lay the foundation for restored streams and watersheds in the future. It takes time for trees to grow and for streams to fully develop their natural ecology. Newland stressed that those are long-term results.

“Newly restored streams are never going to be as good as the streams that are not impacted,” Newland says. “We need to be clear about that. We’re not magicians. We are careful practitioners ,and we’re very dedicated and experienced at what we do. But a restored stream, it may take a hundred years before it has the same ecological function as a stream that wasn’t messed up to start with.”

But without restoration, the ecology might continue to deteriorate. Canaan Valley Institute restores streams to the best possible condition they can, and then lets Mother Nature take her course.