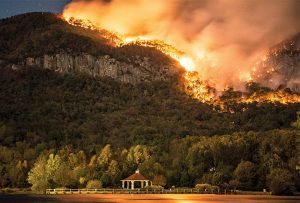 Numerous forest fires continue to burn across Southern and Central Appalachia due to dry weather conditions. According to USA Today, over 119,000 acres of forest have already burned throughout the region this fall.

At least 300 homes and business were damaged or destroyed after wildfires tore through the city of Gatlinburg and Sevier County, Tenn., on Nov. 28. Fourteen people lost their lives in the blaze and its aftermath.

The Southeast is currently experiencing a “once in a generation drought,” according to PBS News. While drought has increased the spread and intensity of the fires, arson is to blame for many of them. The Associated Press announced that multiple people were arrested for intentionally starting fires. A Kentucky resident was arrested after he started a wildfire to gain popularity on his Facebook page through a forest fire video.

Over 200 homes in the Nantahala National Forest in Western North Carolina were evacuated, and N.C. Governor Pat McCrory issued a state of emergency in 25 counties.

Smoke from the fires is also a public health hazard. According to the Weather Channel, at least two people in Kentucky died from respiratory complications due to the fires, while hundreds have been hospitalized.

Thousands of volunteers are working to stop the spread of the fires, including firefighters from across the country.

Citizens should check to see if their county is under an open burning ban. The North Carolina Forest Service advises keeping a shovel and water at hand if burning outside is necessary.

Editor’s note: The print version of this article stated that seven lives were lost in the Gatlinburg fire at press time. That figure has been updated in this version.