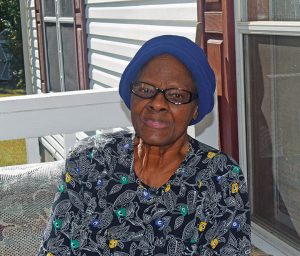 Cora Perkins worries about the health impacts and accompanying medical bills if a compressor station is sited nearby. Photo by Molly Moore

UPDATE: On Dec. 12, the Buckingham County Board of Supervisors held its monthly meeting. WMRA reported that more than 150 citizens attended, with more than a dozen people speaking out against the compressor station during the general comment period. During that meeting, the board also set the date for a public hearing regarding the special use permit for the natural gas compressor station for Jan. 5, 2017. Click here for information about the public hearing.

Ella Rose grew up in Nelson County, Va., across the James River from her current home in Buckingham County. From her dining room table, she enjoys the simple pleasure of looking out across the grassy yard flanked by tall evergreens and watching the wildlife pass by.

But lately Rose has been concerned about the potential for a natural gas compressor station to be built on the other side of those evergreens.

Buckingham County, just east of the mountains and south of the James River, is the geographic center of Virginia. It’s also become a focus in the regional push against new natural gas infrastructure.

To keep gas moving through the pipelines at sufficient pressure, the networks that transport fracked gas from the drill sites to the final destination require compressor stations. In this case, the 53,784-horsepower facility would also connect the proposed Atlantic Coast Pipeline, which would extend from West Virginia to North Carolina, to the existing Transco Pipeline.

Scores of local residents like Rose have publicly voiced their opposition to Dominion Resources’ plan to install a compressor station on a 68-acre parcel of land bordered by the largely African American Union Hill community.

Cora Perkins’ property also flanks the proposed site, and she says thoughts of the compressor station sometimes keep her up at night. A survivor of three open-heart surgeries, the dust kicked up by vacuuming is enough to bother her breathing.

Her five-year-old great-grandson also has breathing difficulties, and Perkins says she’s concerned about whether he will be safe at her home on the family land if the compressor station is installed nearby.

Chad Oba and her husband have lived near Perkins for 30 years. Oba is also a member of Friends of Buckingham, a grassroots group opposed to the pipeline and compressor station. “I really feel as though we’re getting the most polluting aspect of this pipeline,” she says.

In October, the Buckingham County Planning Commission held its first hearing regarding a special use permit to build the facility in an area zoned for agricultural use. So many citizens arrived to speak against the compressor station that the commission devoted another meeting to the topic — and still, enough concerned residents arrived that the commission scheduled yet another meeting to allow Dominion a chance to respond. 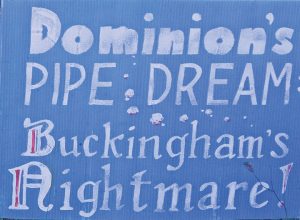 A sign near Dominion’s proposed facility. Photo by Molly Moore

Days before the fourth planning commission meeting, news broke that Buckingham County had entered into an “agreement in principle” with one of the county’s largest employers, Kyanite Mining Co., along with Columbia Gas Virginia, that would allow Kyanite to tap into gas from the new pipeline to fuel industrial burners at the company’s plant. Until that point, none of the Atlantic Coast Pipeline’s gas was expected to go to local customers, a point of contention for many of the compressor station’s potential neighbors.

At the next planning commission meeting on Nov. 21, the commissioners announced their decision to recommend the project along with a set of 40 conditions, eight more than in the original permit. These conditions include limits on overnight noise, additional safety measures and added consequences for any permit violations. The commission also recommended limiting the size of the compressor station to 55,000 horsepower and requiring that any increase in size undergo new permitting.

In the public comment period following the commission’s announcement, more than a dozen community members shared their concerns.

In the next step in the process, the Buckingham County Board of Supervisors is expected to make a decision regarding the compressor station application in December or January. Although the board has supported the new gas infrastructure in the past, Friends of Buckingham and other concerned citizens intend to continue advocating against the facility.

According to the Richmond Times-Dispatch, as the commissioners and others left the Nov. 21 meeting, opponents of the compressor station began a chant: “People gonna rise like the water, gonna shut this pipeline down!”

John Laury grew up in Buckingham County’s Union Hill neighborhood. After decades away, he returned in 2003 with his wife Ruby and step-grandson. They now raise cattle on a peaceful, quiet property near several of John’s siblings. But Ruby and John are concerned that the proposed nearby compressor station and new natural gas pipeline could threaten their well water and clean air. 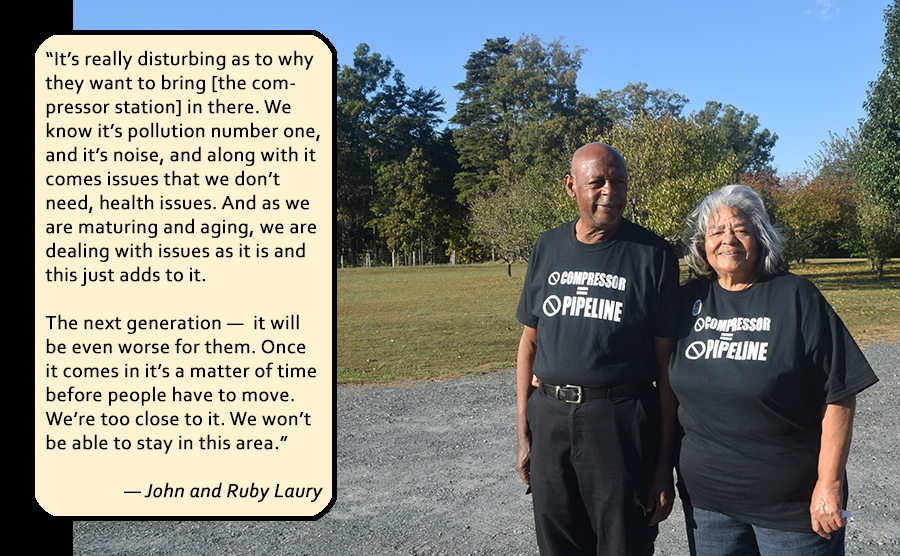 “We have a family homesite and all of my siblings own property just about a mile away from the compressor station … So our concerns are what it’s doing to the property values — it’s devaluing it. There are people trying to sell their property in the area now and they’re not able to sell them.

We’re being asked to trust Dominion, to put our lives on the line in so many cases. It may work fine for 20 years, but it only takes one eruption and then we got a major problem.


With all the money that Dominion has to invest, they could very well have approached a farmer who had thousands of acres and bought him out and put that in the center so it wouldn’t be really close to residents. And here it is, it’s right in the backyard of quite a few residents. And that’s to me unimaginable. Even though we’re in rural Buckingham, it’s not that rural when you start looking at potential impacts.” — Adrian Jones

Carlos Arostegui is a firm opponent of both the compressor station and the associated natural gas pipeline. At Whispering Creek Farm, Arostegui grazes 36 Jersey dairy cows on 134 acres. The proposed Atlantic Coast Pipeline would cut through his back pasture on its way to the proposed compressor station roughly a mile from his home. He and his wife just finished paying for perimeter fencing, but the pipeline right-of-way would cut through the pasture. “They’re taking half that field away from me because I’m not going to have my cows going across that pipeline right-of-way,” he says. 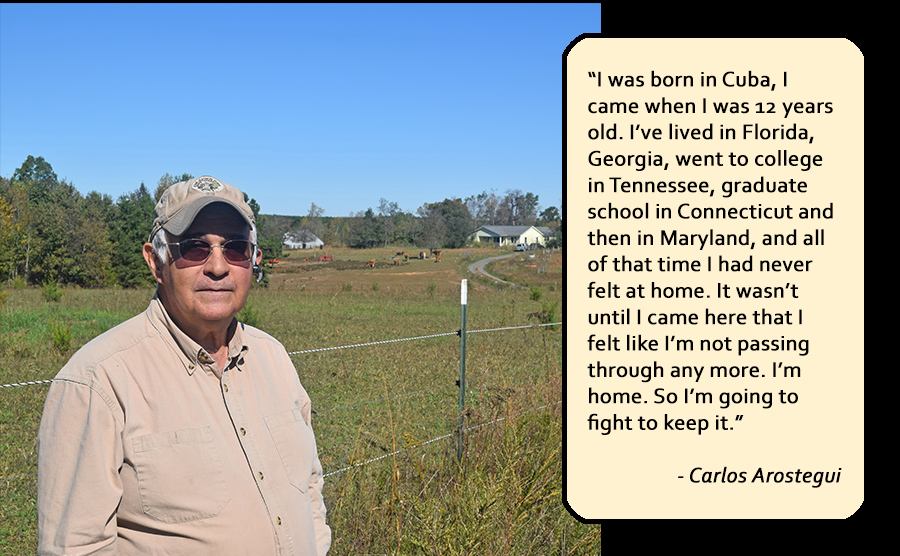 “It’s highly likely the property would devalue, and it’s our sole life investment — it’s the only thing we really have that we can turn around if we needed to and move elsewhere. So to have it so severely devalued as we expect it to, that’s a real concern.

We’ve given some really, really good economic projections and very well-substantiated health impact studies from Physicians for Social Responsibility and the Union of Concerned Scientists. These are real impacts, they’re not based on fear, they’re real. And I think that the way of the future is away from fossil fuels, it’s not building more gas infrastructure.”
— Chad Oba 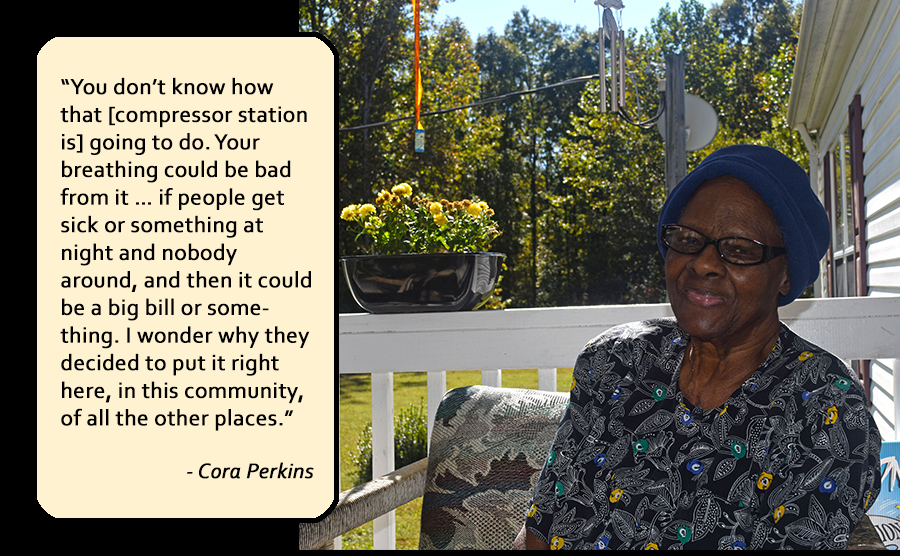