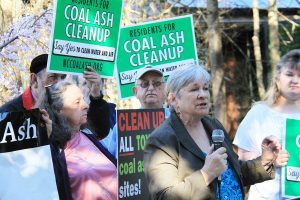 Throughout the month of March, the North Carolina Department of Environmental Quality held a series of public hearings to gather input on cleanup of the state’s nearly 150 tons of coal ash.

The DEQ scheduled individual meetings for each of the state’s 14 coal-fired power plants and their corresponding coal ash impoundments. At each of the hearings, impacted residents, environmental groups and civil rights champions called upon the DEQ to consider all coal ash impoundments in the state as high or intermediate priority. Those classifications require excavation for cleanup instead of allowing the ash to remain in place with a plastic liner cap installed on top. Currently, the DEQ has ranked the coal ash sites into proposed high, intermediate and low categories, with nearly half of the facilities falling in the intermediate and low priority. 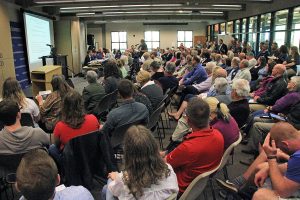 Hundreds of residents packed a series of hearings on coal ash cleanup in North Carolina during March. Photo by Jimmy Davidson

Appalachian Voices’ North Carolina team worked tirelessly throughout January, February and March with partner groups and the A.C.T. Against Coal Ash coalition to inform residents about the hearings. Thanks to those efforts, nearly all 14 meetings were full, with dozens of citizens providing testimony at each.

David Hairston, a resident near the Belews Creek Steam Station in Stokes County, lamented the fact that young people in the area are worried about future health impacts. “If your kids lived here, would it be low priority?” he asked the official. 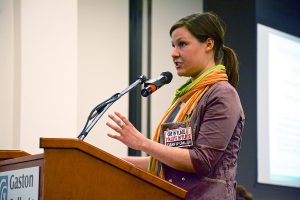 Our N.C. Field Coordinator Sarah Kellogg worked tirelessly to inform residents and prepare comments to present at the hearings. Photo by Jamie Goodman

At the Buck Steam Station meeting held in Salisbury, one resident discussed her concerns about allowing the coal ash impoundments to remain in place, stating that “If that dam were to break, my house would be the first to go.”

Residents living adjacent to the coal facilities also detailed their concerns about water contamination, with some pointing to the state’s Do Not Drink warnings they received last year which were controversially rescinded in early March, shortly after the hearings began.

The final ratings from DEQ are expected to be released May 18. A public comment period held in conjunction with the hearings closes on April 18. Learn more at appvoices.org/truth-about-coalash.