Looking on the bright side, states seek solar benefits 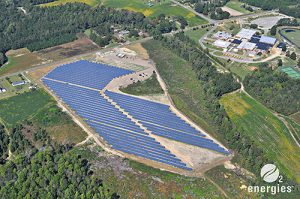 U.S. jobs grew nearly 20 times faster in the solar industry than the whole economy’s national average, reports The Solar Foundation. Recent findings by the research nonprofit project a slowdown by 2017, when a federal tax credit is scheduled to monumentally shrink. In the meantime, however, some southeastern states are catching the rays of the burgeoning industry with policies encouraging growth in both privately-owned and utility-scale solar.

The Georgia House of Representatives is expected to pass a bill that will remove a major economic barrier to rooftop solar for homes and businesses: the lack of financing options. State law currently outlaws third-party financing, when an investor buys a solar panel and sells the electricity to the host site at a reduced rate. The bill would allow this type of solar leasing, thus eliminating the need for up-front investment when a utility customer considers buying a solar panel.

In North Carolina, the Utilities Commission renewed an order that requires state utilities to provide standard contracts when buying electricity from independent solar installations that generate five megawatts or less. Duke Energy and Dominion Power, meanwhile, had pushed to lower that threshold to installations 100 kilowatts or less. Solar energy advocates argued that negotiating custom contracts with Duke and Dominion would cripple independent solar development in the state. Duke owns only 4 percent of the solar energy in its portfolio, according to Charlotte’s National Public Radio syndicate.

Last month, The Tennessee Valley Authority announced that it will offer its version of a standard contract for up to 100 MW of renewable energy development. Projects between 50 kilowatts and 20 megawatts are eligible, and the contracts last for 20 years. While solar energy represents only 1 percent of nationwide electricity generation, the solar installation sector is already larger than familiar fossil fuels, such as coal mining, oil and natural gas, The Solar Foundation report found.