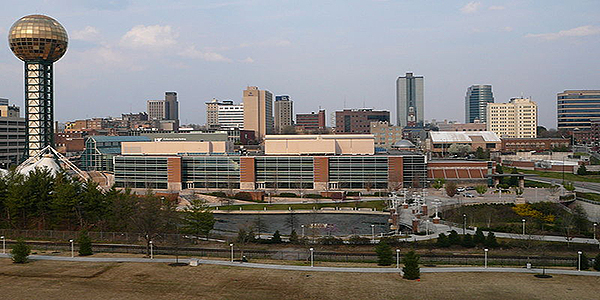 Knoxville, Tenn. ranks second in the nation for growth in green jobs and is one of only a handful of American cities to have fully bounced back from the economic recession, according to a recent Brookings Institute report. Since 2006, the city has reduced carbon emissions by 17 percent, and under Mayor Madeline Rogero’s progressive leadership, is pursuing over 30 green initiatives to further reduce emissions 20 percent by 2020. When it comes to meeting today’s needs with tomorrow in mind, Knoxville is leading by example.

Recently, Knoxville implemented efficient lighting in government buildings and replaced nearly every traffic signal and streetlight with LED lights, which use 90 percent less energy than traditional incandescents The retrofits paid for themselves within two years, saving taxpayers upwards of $250,000 annually.

In 2013, the Tennessee Valley Authority and its Green Power Switch partners named Knoxville the Sustainable Community of the Year. Green Power Switch offers communities the option to support renewable energy by paying a little more on monthly utility bills, and through the program, Knoxville residents contribute to the production of over 56,250 kilowatt hours of clean energy each month. The city also offers rebates up to $15,000 for Energy Star-certified homes, which use up to 30 percent less energy than the average household.

A Department of Energy Solar Cities grant helped the city implement municipal solar projects, increasing solar capacity from 15 kilowatts to over 2,000 kilowatts in less than four years. The grant also encourages growth in the private energy sector by informing regional contractors about solar technologies and certifications while simplifying zoning and permitting regulations for new solar projects.

Another nonprofit, the Knoxville Recycling Coalition, has worked for more environmentally sound waste management for over 20 years, offering public workshops and demonstrations about sustainable recycling methods. The coalition created — and still runs — Knoxville’s first multi-material recycling facility. In 2011, the city followed suit by offering a single-stream, curbside recycling program for all residents.

Partnerships with Oak Ridge National Laboratory, ECOtality and Tesla have enabled Knoxville to erect electric car charging stations in more than 30 locations — some entirely solar-powered. Residents without electric vehicles can still travel sustainably via Knoxville’s revamped public transportation system, which utilizes propane-powered buses and shuttles retrofitted with particulate filters to reduce carbon emissions. Low-emission travel is incentivized by Smart Trips, an award-winning program where Knoxville commuters can earn gift cards of up to $100 by logging how often they walk, bike, telecommute or use public transit.