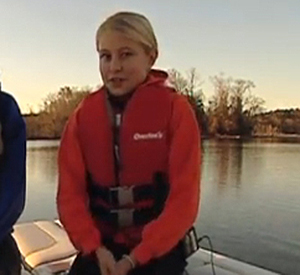 Seventh grader Anna Behnke loves to swim in Mountain Island Lake, but two years ago, she learned about the water pollution caused by Duke Energy’s Riverbend coal-fired power plant and began to worry about the impact the pollution could have on children’s health. So, for a sixth grade science project, Behnke tested the arsenic levels at Mountain Island Lake and found levels 20 times higher than Environmental Protection Agency standards.

“I wanted to show the people in my grade and school how the plant impacts the water,” says Behnke. “Not a lot of people think about it even though we pass the power plant on the way to school. They don’t realize that it can hurt our health.”

Although Duke is demolishing the Riverbend plant in 2014, Behnke worries about how the company will clean up the unlined coal ash ponds which store over 3 million gallons of toxic coal ash and discharge directly into Mountain Island Lake, the drinking water source for most of Mecklenburg and Gaston counties. “I want to write a letter to President Obama about this, just to inform him of everything that’s been happening where I live,” she says. Behnke also plans to teach her science class about mountaintop removal coal mining and the pollution caused by burning coal.

Behnke has heard Duke project that in 20 years, only 3 percent of North Carolina’s energy will be produced by renewables. “I want to fix that,” says Behnke. “Riverbend was the first plant to shut down in North Carolina and I’m really happy about that. I hope that other activists will start to realize that if we did it, then they can too.”