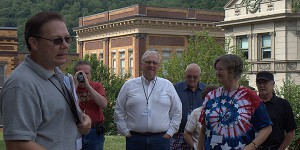 In 1978, student Doug Estepp was poking around in the West Virginia University library when he came across a newspaper headline describing the 1920 Matewan shootout — a violent episode in the dispute between coal companies and pro-union miners. Although Estepp grew up near Matewan in Mingo County, W.Va., it was the first time he had heard of the infamous event. His discovery that day sparked a lifelong passion for the state’s colorful history, which he now shares with others through his company, Coal Country Tours.

Estepp formed the venture to test the idea that southern West Virginia’s storied past could draw tourism dollars to the area and help diversify the struggling economy. By showing visitors how the notorious Hatfield-McCoy feud served as “the opening shot of the mine wars” — an epoch that culminated in the Battle of Blair Mountain, the country’s largest civil insurrection since the Civil War — he uses local lore to discuss current struggles.

“If we’re lucky, we will get to mine the coal twice,” Estepp says, “because it’s been mined for energy and now with coal drying up, hopefully we can mine it again because the history behind the industry and the mine wars … is just fascinating, incredible history.”

He has taken more than 400 clients on multi-day tours since 2010. Visitors stay at state parks and Estepp seeks out local caterers, restaurants and guides, keeping tourism dollars in the community. Engagement between visitors and locals is key — guests watch reenactments by community groups, share dinners with mining families, and sometimes hear stories from locals who witnessed events such as the harrowing Buffalo Creek Flood firsthand.

Estepp believes the region’s history could capture the public imagination like the story of the Titanic did. Creating that future, he says, begins with saving Blair Mountain from the threat of mountaintop removal coal mining and establishing a museum to serve as a focal point for area tourism.

Meanwhile, Estepp is connecting interested visitors with the people and stories of West Virginia one busload at a time.