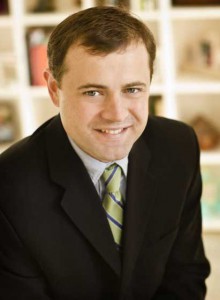 Tom Perriello, a lifelong resident of Ablemarle County, Va., is a steadfast supporter of environmental and poverty concerns. He used his background in law to prosecute warlords in West Africa, was named one of Time Magazine’s “40 under 40” in 2010, and represented Virginia’s 5th district from 2009 to 2011. While in Congress, he supported “cap and trade” legislation, a market-based approach to curbing greenhouse gas emissions, and co-sponsored the Clean Water Protection Act to sharply curtail mountaintop removal coal mining. Currently, he is president and CEO of the Center for American Progress Action Fund and counselor for policy to the Center for American Progress, a left-leaning think tank. He spoke with Alix John, Appalachian Voices’ editorial assistant, earlier this summer.

Would you say that your faith has influenced your support on environmental policy and conservation?


I think one of the central tenets is certainly to feel some responsibility to take care of [the] beauty that we’ve been given, and I think it’s also true that there’s a core sense of personal responsibility … not to take from future generations or leave them in a worse place in terms of the environment and conditions. And I also think that from our faith that … there’s an emphasis on caring for the most vulnerable among us and I think what we know when it comes to many issues of the environment is that it is our poorest community as well as the youngest and the elderly who are most affected by much of the pollution that comes into the environment.

So I think in that sense my faith has been central to my sense of general personal responsibility, in which the environment plays off caring for what God’s given us and of that sense that we have to take particular care for those who have the least among us and that tend to be disproportionately affected by the pollution of our air, water, and bodies.

How influential would you say the coal industry is in Virginia politics?

I think the coal industry has tried a series of arguments that have been working less and less effectively that suggest that somehow following 100 percent of their agenda is the key to those jobs. You saw this in the last election cycle, where they threatened that if Obama was re-elected, they would immediately have to lay off all of these workers. What you saw, actually was that they brought back workers and so I think they probably cried wolf a few too many times.

I think most voters are smart enough to look at the facts that these people seem a lot more interested in maximizing the profits of a few than protecting the jobs of the many — and that undermines the political influence they have.

How does the coal industry’s influence affect Virginia and the country?

I think that the best thing for our country is that the government reflects the people; that’s essential to a democracy. To the extent that they’re using money for threats to pervert that process, I think that is unhealthy for our country and I think that unfortunately you’ve seen from several of the key figures of the coal industry, repeated willingness to say things that are dishonest, to put workers at risk, to put jobs at risk, for protecting their own concentration of profits. I think in that sense you have both an economic perversion and a democratic perversion.

So, I don’t have a problem with any group organizing supporters. I think that’s important, but I have an opposition to any group that tries to buy the process, or use threats, to try to pervert that process. That’s not right for Virginia and that’s not right for the country.

Why do you think strong energy efficiency policies are important for our region and our country?

Fundamentally, we have to have a strategy to outcompete the world if we’re going to have the kind of job that can support middle and working class families. Energy efficiency, by its very nature, means we’re being more efficient; we’re reducing costs, which is going to be one of the keys for America outcompeting the world. We’re on the edge of innovation and technology and we’ve already seen this get internalized.

American families are already saving a ton of money because of these efficiency standards that are demanded by investments and by environmental groups. I think there are a lot of families out there who are glad to know they’re having to consume less energy and less electricity and less gas because of these efficiency standards that put us in there. So it makes us more competitive by increasing efficiency across the board but also by spurring the kind of technological innovation that we do better than anybody else in the world.

Do you think it’s difficult for politicians to implement strong energy efficiency policies?

I think it’s tough, but not impossible. I think it’s a combination of elected some officials that have the backbone to do what they know is right for the country and where we’ve seen that, we’ve seen great gains. Sometimes that can be done by executive action, which the president has done with fuel efficiency standards. And sometimes it’s with investments, such as the research development and battery technology and other things. Sometimes it’s by [supporting] the brightest minds of today, like we saw with Tesla, paying back its loan — I think 9 years early and in-full — for its groundbreaking work in automotive technology.

I think this is a place where success breeds success. I think where politicians have stepped up and supported this, the return for American families and American businesses have been quite significant and we can build on that.

What do you think can be done to fix the policy gridlock on something as simple as energy efficiency?

Well, I wish I had a magic wand on this one. I think we have to reach a point where political leaders are more interested in doing what’s right, than what scores them points with their base. I think the gerrymandering-on-steroids that we’ve seen in the last few years has made more and more officials, particularly Republican officials, more worried about a primary challenge than they’re worried about appealing to Independent voters. That’s a problem.

I think there are a lot of business leaders and economists who will tell you over and over again how important energy efficiency and clean energy are to our economy. But are they willing to just put that in a way that says, “I’m going to make this something that affects my political decisions of who I donate to and who I support.” And I think we’re starting to see, with the kind of extreme weather patterns and the billions of dollars that are associated with it, you see independent groups like actuaries who don’t have, you know, a political axe to grind building this into their models because of the enormous expense.

I think it’s a time where, frankly, we need a little bit of leadership and guts from our political leaders and then I think we need to look at some of the structural issues, like the role of money in politics and extreme gerrymandering.

What can regular citizens and citizen groups do to promote, or encourage energy efficiency policy?

I think people should never underestimate how much their voice matters. And even if you feel like you’re represented by someone in Congress who seems to … bury their head in the sand, and act like reality isn’t real, it’s still worth speaking up. Write a letter to the editor, make a phone call to the member, so I think that’s one thing — never stop using your voice as a citizen and joining with other citizens.

And the second thing, I think nothing breeds success like success and so one of the ways to do it is to start a business in this field, or to support a business in this field. You know, there is real money to be made in doing the kind of home efficiency rebuilds and other things that can increase efficiency over time and work with the business communities and others to do that. I think one of the ways to really do that is to try to lead by demonstrating and there’s a lot of room for that right now.

Some make the argument that reducing carbon pollution cost jobs. How would you respond to that?

I think you can look just in the last couple of years at what China’s doing. China is out-investing us in energy efficiency. They’re actually now looking like they may put in a cap-and-trade system before we do, because they understand this is going to be crucial in who wins jobs of the future. So, if you look at Germany and why one of the reasons they’ve been so successful when the rest of Europe has been struggling during this economic crisis, the huge part is they made a major investment in clean energy jobs and continue to have the kind of manufacturing jobs that you can support a middle class family with. The key to American jobs in the future is for us to be ahead of the curve, not following China on these issues.

Well, I think your organization has done more than just about any others on educating people about the facts with mountaintop removal. I think at a minimum, citizens have a right to know what’s being put into their streams, and keeping toxic waste out of streams. This does not seem like a particularly controversial standard to me.

There’s been an argument made for a long time by people who got very rich making the argument that [mountaintop removal coal mining] is going to be good for these communities and the reality has not played out that way. And what we find is, rather than allowing a race to the bottom to exist, in which companies race to see how badly they can destroy communities and rivers, we should be able to set a base standard … We made a promise to our citizens for a long time that asking for clean air and clean water is not too much to ask for. We should continue to live up to that promise and believe that we can — it’s not too much to ask — that we’re not poisoning our citizens.