Seeking A Return to Truth 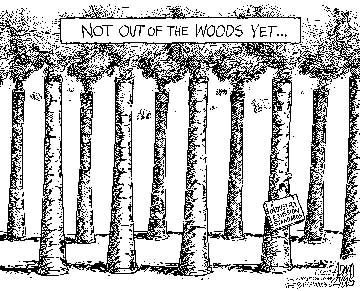 When did America’s leaders stop trusting in science?

This fair country, with its wealth of knowledge and opportunity, used to be one of the global frontrunners in scientific reasoning, influence and education. We stood by the principles of proof rather than blind emotion or myth. In the 19th century, those principles brought us anesthesia and refrigeration, and in the 20th century they launched us to the moon and made us a leader in medicine, computer technology. In fact, since 1950, Americans have won approximately half of the Nobel Prizes awarded in the sciences.

So tell me, when did we abandon reason for madness?

In some circles in modern America, to admit that climate change exists is to admit that what many of our corporate interests have done in pursuit of profit is not only selfish, but immoral, unjust and in some cases amounts to negligent homicide.

We have never been more equipped, technologically or cognitively, to address the greatest challenges of our time. And climate change is unequivocally one of them. Yet, instead of taking sound science into account, much less accept and act on it, many continue to choose denial.

The twisting of scientific facts — and climate science in particular — is a smokescreen that hides the guilt and fattened purses of those who are desecrating our planet, poisoning people and polluting the future of our children in exchange for quarterly earnings.

According to a yearly study by Yale University, following the severe drought and bizarre weather of the past two years, a whopping 66 percent of Americans believe in climate change, while a report by the George Mason University Center for Climate Change Communication revealed that 72 percent believe that developing clean energies should be a national priority. Even following the cold winters of 2009 and 2010, more than half of Americans still believed climate change was a real threat — despite studies that show colder winters skew the results even if summers are warmer.

But thanks to a powerful propaganda machine, unscrupulous media outlets that act as little more than echo chambers, and embedded industry lobbyists on Capitol Hill, the nation’s politicians are falling in line not with honest and verifiable scientific facts, and not with the American people they purport to represent, but with the corporations that line their pockets.

Our most admired Founding Fathers — including John Adams, Thomas Jefferson and Benjamin Franklin — adhered to the tenets of scientific study. It’s time that the American people demand that our politicians embrace a mindset where sensibility and reason prevail and scientific fact is accepted as just that — fact.

So tell me, when will we return from madness to reason?