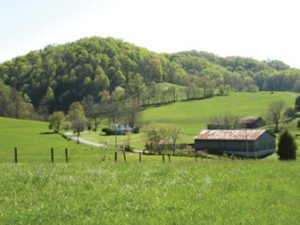 The view from Mary’s Chapel, near the Washington County, Va. community of Benhams. The chapel and valley sit above deposits of shale that have attracted attention from a gas-drilling company. Photo by Paige Campbell

By Paige Campbell
Half a dozen generations ago, when a coal-mining boom first enticed southwest Virginians to sell the rights to minerals beneath their land, the deal they were making concerned the coal itself. At least, that’s how Virginia’s courts have defined mineral ownership through most of the state’s mining history. But on April 9, that understanding shifted when Governor Bob McDonnell signed state House Bill 710 into law.

Mining companies are now legally entitled to not just the coal, but the empty void created by its removal. In practical terms, H.B. 710 allows companies to use mine voids as disposal sites for coal mining waste products. In fact, at least one mining company, CONSOL Energy, routinely used empty Buchanan County, Va., chambers for that purpose without landowners’ consent until 2008, when the company was found guilty of trespassing and eventually paid $75 million in damages.

Following H.B. 710, if CONSOL or any other company wants to use a voided mine for waste storage, they need only to negotiate a price. The law says that landowners are entitled to financial compensation, but cannot refuse a coal company’s contract outright. If the two parties fail to reach an agreement, a judge will determine fair settlement.

It’s a monumental re-structuring of property rights, says Gerald Gray of Clintwood, Va., an attorney representing Buchanan County landowners who say the mine voids under their land were used as dumping grounds for mine wastewater without their consent. In the original mineral deeds, “there was never any contemplation that a coal company would retain substantial rights to the land after the coal was removed,” Gray says. “The Supreme Court has made it quite clear in several past decisions that the surface owner owns the mine void.”

Untreated coal processing wastewater, which contains toxins including mercury and arsenic, can present environmental concerns to aquifers and other drinking water sources, says Gray, who is also the president of the Virginia Conservation Network. His biggest concern, however, is the political might of the coal industry. “When the minerals were acquired by the coal companies, they could have bought the right to use the mine voids to deposit waste. But they didn’t. This new law allows the industry to essentially condemn private property for its own purpose and financial gain.” He believes that H.B. 710 violates the Virginia constitution.

State Senator Phillip Puckett, who represents Virginia’s southwestern counties, initially opposed the bill. But ultimately, an amendment that called for routine financial negotiations between landowners and the coal companies swayed his vote. “The original bill had no provisions for that,” says Puckett. For many landowners, filing suit independently would be far too costly.

“I don’t like coal companies running rough-shod over people,” says Puckett, “but I also know that these companies bring some of the best jobs we’ve got in Buchanan County.” Puckett says he aims to navigate that balance in his district’s best interest.

Such pragmatism, however, does little to ease the deep concerns of constituents like Ben Hooper of Appalachia, Va. A long-time advocate for the protection of southwest Virginia’s mountains, Hooper sees a heavy corporate hand at play in H.B. 710’s passage. “This law was passed, bought by coal, to stem off lawsuits,” he says plainly.

The coal industry, Hooper believes, fueled a legal shift unthinkable to other industries. “If I were to buy timber rights from a property owner,” he wonders, “could I expect to own the void once the timber is removed?”

To Hooper, the law is a new chapter in a familiar raw deal for local people as they lose long-term economic power in exchange for small payouts. In his community, “rarely does anyone own their mineral rights,” he says. “They were sold years ago, and now we feel we’ve lost even more.”

As H.B. 710 cases begin to play out across Virginia, the legal nuances could inform another looming property-rights battle involving hydraulic fracturing for natural gas. The controversial techniques — which have been shown to cause groundwater contamination, among other issues — have forced lawmakers across the region to grapple with new regulatory legislation.

In Pennsylvania, existing gas regulations are rooted in a state Supreme Court decision that compared natural gas to, for lack of a more precise classification, a wild animal. An 1889 ruling declared that free-flowing natural gas, like an animal being pursued by a hunter, has “the power and the tendency to escape without the volition of the [land]owner.” Therefore, according to the ruling, “possession of the land… is not necessarily possession of the gas.”

The context for the court’s analogy goes back even further, to the dead fox that prompted New York’s landmark Pierson v. Post decision in 1805. Pierson, the man who shot the fox in question, was allowed to keep it, the state’s highest court determined, overruling a lower court’s finding in favor of Post, who’d been pursuing the fox well before Pierson laid eyes on it.

That’s the essence of the “Rule of Capture” — the first person to physically possess a wild animal (or a free-flowing supply of natural gas, as the case may be) gets to claim ownership of it, even if it originated on someone else’s property, and even if that someone saw it first.

When applied to gas drilling, the Rule of Capture led to disorder and waste, says John K. Baillie of PennFuture, a citizen-led organization advocating for natural resource conservation. Landowners scrambled to extract their gas before their neighbors could. But so many small wells meant no one was collecting much, Baillie wrote in a 2011 academic paper titled, “Pooling and Unitization in Pennsylvania,” and the sudden abundance depressed prices. So in 1964, a new law introduced the concept of forced pooling, a process that maps out large plots, each comprised of many people’s property, to supply individual wells. The goal was for landowners to be compensated for their share of the gas and benefit from the improved efficiency.

The gas extracted from Pennsylvania’s Marcellus Shale, however, sits at a depth that is not covered by the 1964 law. It is also not free-flowing, and requires the use of horizontal, not vertical, wells. In Pennsylvania, those conditions have been understood to exclude fracking from the forced-pooling laws already on the books.

In other words, if Marcellus Shale gas is a wild animal, it’s a different sort of beast than early Pennsylvania jurists could have envisioned. It’s a beast that demands more invasive drilling techniques and thus demands its own legislation, which the industry is eager to introduce. One proposed bill would require the consent of 75 percent of landowners before pooling can begin; the rest could be compelled to negotiate for royalties and to allow the drilling to proceed against their objections.

In Virginia, where laws make no distinction between vertical and horizontal wells, the most industry-friendly forced-pooling laws in the nation allow gas companies to extract from a pool of properties with the consent of just 25 percent of landowners. Compensation to the rest — who often aren’t even notified of the drilling — is periodically sent to a statewide escrow account.

But as Daniel Gilbert of the Bristol Herald Courier reported in 2009, many landowners who are force-pooled “receive no accounting of their royalties in escrow, and they face enormous legal barriers in collecting them.” What’s more, Gilbert found, is that state regulators have done little to ensure gas companies actually pay up. In each of the 18 months he studied between January 2008 and June 2009, at least 22 percent of landowners who were subjected to forced pooling failed to receive any royalties at all, even though their corresponding wells had produced gas. In some months, that number was over half.

The Right to Resist

As the natural gas boom continues, states are facing regulatory challenges to protect private landowners. In Dimock, Pa. — a town transformed by hydraulic fracturing in the Marcellus Shale — a drilling rig looms over a nearby home. Photo by Aaron Nutter.

Some Virginia municipalities with local bans on gas drilling are taking another look at the issue now that the southern reaches of the Marcellus Shale, with all its lucrative potential, has caught the industry’s eye. Last year, the Washington County, Va., board of supervisors faced pressure to reverse its long-held prohibition against gas drilling when the Southeast Land and Mineral Company petitioned to establish new 160-acre forced drilling pools in the remote community of Benhams and begin extracting gas.

In Benhams, one-lane roads snake between hillside cow pastures, just-tilled gardens and thick patches of woods full of trilling cicadas. Karen Shaffer’s roots in the community go back over a century, to her great-grandparents who came from Italy and Ireland to farm and hunt. Shaffer remembers Sundays of her childhood: picking up milk at Spahr’s dairy for dinners at her grandparents’, pitching horseshoes, looking for ginseng and visiting small family cemeteries across the valley.

“These sacred spaces would be endangered by gas drilling,” says Shaffer. If drilling is allowed and just a quarter of her neighbors sign on, fracking chemicals could start fracturing the rock deep beneath her land without her consent. She fears contamination of the spring that supplies her water, air and noise pollution, and compromised safety for children at two nearby schools.

But for the short-term, Shaffer can breathe easy. Outcry from the Benhams community and members of the local chapter of Virginia Organizing, a statewide community organizing network, recently helped prevent the county’s land-use committee from quietly changing the ordinance.

Ultimately, the county’s board of supervisors voted to permit no further action on the matter until a nationwide U.S. Environmental Protection Agency report on the safety of fracking is released in 2014. The prohibition on gas drilling will remain until then.

The take-away for Shaffer? “People have rights over drillers.” And the key to claiming those rights, in her experience, depends on an organized effort to inform citizens of the legal process and the real stakes. “I am certain our collective voice raised awareness enough to stall drilling for now.”