Time to Stop the Denial

Let’s talk about losing touch. According to a 2011 study by the Pew Research Center, fewer Americans believe in global warming than did five years ago. Politicians treat climate change as a non-issue and wage war on the U.S. Environmental Protection Agency as if Americans asked for it. In reality, the opposites are resolutely true. Surveys by the Public Policy Polling show that Americans want the environment protected and peer-reviewed studies confirm that we cannot afford to wait any longer to accept and proactively deal with climate change. After all, these are not political issues to be used; they are issues of conscience. 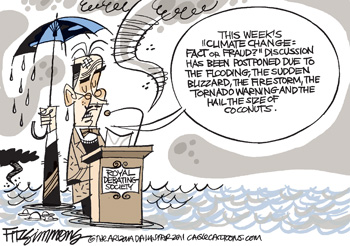 Upon completing the two-year Berkeley Earth Surface Temperature study, American physicist Richard Muller, a long-time climate skeptic, changed his position. “Global warming is real,” he declared in the Wall Street Journal, citing findings that global temperatures have risen around 1.8 degrees Fahrenheit over the past 50 years.

It’s unlikely these are the results that the right-wing Charles Koch Foundation (one of the study’s funders) had expected or hoped for. The foundation released a statement reminding that, amidst the media frenzy, the Berkeley study is under peer review. But Koch is a climate change denier, not a skeptic, an important distinction as one changes their views to fit the evidence — the other ignores it.

At a Nov. 14 congressional hearing organized by the ranking member of the House Energy and Commerce Committee, Ed Markey (D-Mass.), Muller briefed policymakers on the results of the study. There is no way to know, however, if Muller’s recommendations will result in any positive change.

Meanwhile, the EPA continues to fight off attacks by politicians clinging to the unsupported argument that environmental regulations kill jobs. Surveys by Public Policy Polling show that attacks on the agency’s ability to protect the air and water won’t get politicians far with the majority of American voters. Among the results: 78 percent of voters want the EPA to hold polluters accountable for their toxic emissions.

It’s time to stop denying and start listening. How many more so-called studies funded by pro-industry climate change deniers will yield the same results, while they continue to ignore the fact that 95 percent of the scientific community accepts climate change?

In 2010, we saw the largest increase in carbon dioxide pumped into the atmosphere since the industrial revolution began — 564 million more tons than in 2009, an increase of six percent. The approval rating of Congress is hovering around nine percent, the lowest ever. I would not go so far as to claim that these numbers are correlated, but I’m not going to deny it.