Rally to Save Ison Rock 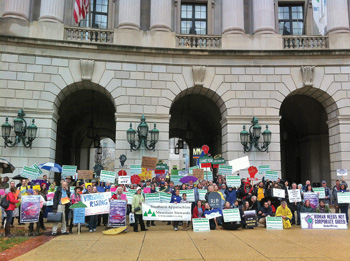 Hundreds of citizens gathered at U.S. Environmental Protection Agency headquarters in Washington, D.C., on Nov. 16 to call on the EPA and White House to block a proposed mountaintop removal permit that would destroy Ison Rock Ridge in Wise County, Va. More
than 2,000 residents living in the five communities that surround the mountain would be impacted by the permit. Members of the Wise Energy for Virginia Coalition joined Wise County residents and several other groups to deliver a letter asking EPA officials to deny the 1,200-acre permit. Prior to to the rally, more than 8,000 comments were submitted to the EPA asking the agency to keep Ison Rock Ridge standing.

Big Thanks to My Morning Jacket

On Aug. 21, My Morning Jacket and opening guest Neko Case played a concert in Charlotte, N.C., that benefited Appalachian Voices. My Morning Jacket is based in Louisville, Ky., and its members have long been aware of the destruction in their home state caused by mountaintop removal mining.
Jim James, front man of the band, has been active in the movement. He produced Dear Companion, an album by Ben Sollee and Daniel Martin Moore, who contributed the proceeds to iLoveMountains.org and performed a concert in Louisville last December benefitting Kentuckians for the Commonwealth.
With the support of Air Traffic Control, an organization that helps musicians promote social justice, My Morning Jacket raised $2,882 for Appalachian Voices at their Charlotte concert.

This fall, citizens from across Appalachia came to Washington, D.C., to meet with decision-makers about mountaintop removal and coal ash disposal issues. Not only did these citizens sit down and meet with their representatives, they also hosted a screening of the film The Last Mountain on Capitol Hill which was open to all congressional members and their staff.
We were honored to join Representatives Kucinich, Slaughter and Yarmuth in hosting the film with non-profit partners Natural Resources Defense Council, EarthJustice, and the Sierra Club Environmental Justice Program.
Appalachian Voices and The Alliance for Appalachia host regular events in the capital for citizens from Appalachia and around the country to gather and talk about the impacts of mountaintop removal. This year alone, hundreds of individuals have met with

This November, universities across the country hosted screenings of The Last Mountain as part of a coordinated effort to raise awareness about the impacts of
mountaintop removal coal mining. American University was one of many campuses that showed the film to a packed audience. Following the film, volunteers from Southern Appalachian Mountain Stewards of Southwest Virginia led a Q-and-A.
Appalachian Voices partnered with many local venues this summer to host screenings of the film. It was released on DVD last month. For more information visit thelastmountainmovie.com.