The Art of Mushrooming

From portabellas and button mushrooms to the more exotic truffles and shiitakes, there’s no “fun guy” like the edible mushroom. These tasty fungi bring flavor to stir fries, burgers, salads and more. But you do not have to go to a restaurant or the grocery store to take advantage of mushrooms—many edible varieties can be found growing in the wild. You may be able to wildcraft, or forage, mushrooms to supplement your next meal.

Ready to try your hand at wild-crafting mushrooms?

Find an expert to help you identify edible fungi, or consult a resource like Mushrooming Without Fear by Alexander Schwab (Skyhorse Publishing, 2007).


The Appalachian Voice reminds you never to eat wildcrafted plants or fungi unless you are certain of its identification. When in doubt, consult an expert. Never eat plants or fungi from roadside or sites where chemicals may have been used. Thoroughly wash all plants and fungi before eating them.

“’Common’ for mushrooms doesn’t mean that they are easy to find,” said Dr. John Walker, mycologist and assistant professor of biology at Appalachian State University. “You have to be in the right habitat at the right time and have a bit of luck on your side unless you have a known patch.”

For first-timers, it is recommended that you forage with an expert and consult a book for every mushroom you gather from the wild. Keep in mind that mushrooms will absorb toxins from the environment. Even a perfect morel will be unsafe to eat if it has been exposed to toxic substances such as pesticides, herbicides, or car exhaust.

While searching for edible mushrooms, the most important thing to remember is that many mushrooms are not edible—and accidentally putting one of these in your omelet can be deadly.

“It is urgent that collectors know exactly what they are collecting and they should also be familiar with toxic look-alikes,” said Walker. “Most of the common species are distinct and can be reliably identified by inexperienced collectors with proper initial guidance.”

All wildcrafters should be conscious of what, how, and how much they harvest from the wild. While the commercial use of some native plant species, such as the wild onions known as ramps, has led to a decline in their proliferation, responsible harvesting of native mushrooms should help wildcrafters avoid a similar fate for their favorite fungi, according to Walker. 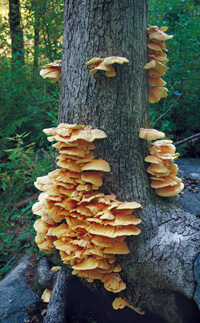 Another way to avoid harming wild populations of native mushrooms is to cultivate them domestically. Shiitake logs have proven to be a popular way to grow mushrooms, and similar methods may increase production of native Appalachian species. Oyster mushrooms (Pleurotus ostreatus), lion’s mane and maitakes have all been cultivated successfully.

Appalachian mushrooms, though often overlooked, are a vital part of the mountain ecosystem. According to Walker, fungi perform critical functions such as breaking down woods debris and providing water and nutrients to forest plants. Some mushrooms are even able to filter out pollutants—oyster mushrooms are known to remediate compounds such as DDT.

With mushrooms being so invaluable, from helping trees grow to helping feed Appalachian residents, protecting these fungi is vital. According to Walker, European mushroom populations, including edible species, have been declining in recent years, most likely due to declining air quality. Preventing pollution and harvesting responsibly will allow Appalachian mushrooms to proliferate, letting wildcrafters enjoy these “fun guys” for generations to come.