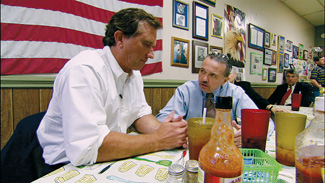 Film director Bill Haney recognized the highly visual and personal nature of mountaintop removal on communities and the environment. This summer Appalachian Voices will hit the road with his documentary, “The Last Mountain,” exposing the issue to new audiences across America.

A Sundance Official Selection, “The Last Mountain” is described as “… a passionate and personal tale that honors the extraordinary power of ordinary Americans when they fight for what they believe in.”

The film chronicles the impact that mining practices have on the Coal River Valley in West Virginia, and includes powerful interviews with local residents whose lives and livelihoods have been affected by mountaintop removal.

Haney said he was moved by “the heroic quality of the people of Appalachia … I met these people who are so inspiring and want to protect their heritage and use their right to the democratic process.”

“The fact is that 2/3 of the folks in Coal River don’t want mountaintop removal, but all of their politicians do,” said Haney. “This is not democracy and these people are fighting to see it. They are fighting to maintain their cultural heritage and the land they rely on—these glorious beautiful mountains.”

Appalachian Voices’ staff, representing iLoveMountains.org and the Alliance for Appalachia, will be present at screenings in eleven cities across the nation this summer. Please support the fight to end mountaintop removal by attending a showing at a theater near you; for more information on theaters and show times, visit thelastmountainmovie.com.

Coming to the following Cities in June:

The violations occurred at more than a dozen of Nally & Hamilton’s operations in Kentucky, with evidence indicating that they filed false and potentially fraudulent water pollution monitoring data with state agencies over the past three years.

On the 59th day of the 60-day filing period, the Commonwealth of Kentucky filed an administrative complaint citing Nally & Hamilton with 4,630 violations of the Clean Water Act and making an initial assessment of $25,000 per violation for a maximum penalty of $115 million.

Feeling that the $115 million dollar fine would likely get cut throughout the proceedings, Appalachian Voices filed a separate Citizens Clean Water Act suit in federal court against the company to ensure the penalties are enough to prevent more violations from happening in the future.

In October 2010, Appalachian Voices and partners filed a legal action against two other mountaintop removal coal mining companies in Kentucky—ICG and Frasure Creek.

Appalachian Voices’ Water Watch team found more than 20,000 violations of the Clean Water Act in water reports filed by the two companies, with maximum potential fines of $740 million. The companies exceeded pollution discharge limits in their permits and in many cases submitted false monitoring data.

Appalachian Water Watch is preparing for the trial against ICG and Frasure Creek. Mediation will take place on June 8, and the trial will likely occur in August. To keep up to date, visit: appvoices.org/waterwatch/ky-legal-action/

Starting Summer With a Splash

As we go to press, the tents are going up and the smell of smoking barbecue is filling picturesque Valle Crucis, N.C., in preparation for Appalachian Voices’ 2nd annual RiverFest on Saturday, June 4.

In case you weren’t able to make it (and we hope you did!), we hosted a full afternoon of fun and games all focused around a central theme—teaching our neighbors about the conservation of our mountain rivers.

Stations included a water cycle obstacle course for kids (where kids then “became” water droplets and learned how water travels from clouds to our kitchen sink!), a pickin’ parlor for the musically inclined, a no-hands watermelon eating contest, fly tying and casting clinics, and a chance to meet a live hellbender salamander!

The event also served as our annual membership meeting, where we gathered with staff and members to talk about the coming year of Appalachian Voices and our work to protect the air, land, water and communities of Appalachia.

No Charge for Discharge

On Wednesday April 20, 2011, Assistant Waterkeeper Eric Chance noticed that Laurel Fork River, in Boone, N.C, was running a grayish color. After tracking down the source of the gray water, it turned out to be discharge from the Vulcan Boone Quarry. The Vulcan Boone Quarry has had previous issues with discharging milky white and gray water. As a result, they installed a camera to monitor their discharge. Although the state was notified and issued a monitoring checklist for Vulcan Quarry to follow, they have indicated that no fines will be issued for the violation. — By Jillian Randel

The High Country’s Spring 2011 Operation Medicine Cabinet took 87,285 pills and 17 liters of liquid medication off the streets, keeping them out of the hands of children and out of our rivers. Over 170 citizens participated at grocery stores and other drop-off locations in Boone, Blowing Rock, Deep Gap and Seven Devils. — By Meg Holden

You Helped Us Reach Our Goal!

Thanks to the generous support of our members, we were able to raise $32,000 in our Earth Day Water Watch Matching Gift Challenge! The funds will go to our Appalachian Water Watch team to help us pay for legal experts in a case against two coal companies for violations of the Clean Water Act. For more information about these cases (and the team’s third lawsuit) see the story on this page. — By Parker Stevens

One of the country’s largest electric utilities, Dominion Resources, voted on a shareholders resolution to consider phasing out purchasing coal extracted by mountaintop removal, among other clean energy resolutions. The resolution received 9% of shareholder votes. While this isn’t close to passing we hope it will help the board take notice of the importance of clean energy initiatives. — By Mike McCoy

Everyone knows that mercury can cause severe birth defects if a mother-to-be ingests too much of it from fish, but not everyone knows where the mercury in fish comes from. One source: coal-fired power plants. Appalachian Voices worked alongside the Sierra Club to test 40 Hampton Roads, Va., citizens’ mercury levels. Hampton Roads waterways are inundated with mercury fallout from several nearby coal plants. Still, the largest coal-fired power plant in the state is being proposed, and would be located just upwind of the Hampton Roads Region. Residents still await test results. Check back with wiseenergyforvirginia.org/
— By Mike McCoy