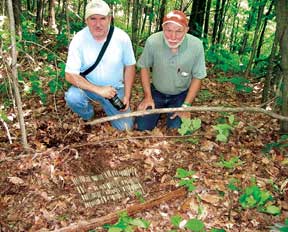 Kenny King and Appalachian Voices founder Harvard Ayers survey over one hundred rifle casings found in a one-foot diameter area along Spruce Fork Ridge on Blair Mountain. The archeological finds helped convince the Park Service to put the area on the Historic Register

The nearly 30-year struggle for federal recognition of the Blair Mountain battlefield in West Virginia, scene of an epic military clash in 1921 between thousands of armed union miners and the coal establishment, climaxed on March 30 with its placement on the National Register of Historic Places. The announcement by the

The decision, which protects just the 1,600 acre battlefield, not the entire mountain, does not—contrary to widespread belief– guarantee protection of the site. Listing on the register “will not in and of itself prevent further strip mining on the mountain,” says historian Barbara Rasmussen, who chairs the West Virginia Preservation Alliance’s task force on Blair Mountain.

Property owners remain largely free to do as they please with land on the register, including mine it. Still, Rasmussen says, strip mining would require a federal permit, triggering a review of its impact on the battlefield. In addition, federal agencies would feel political pressure to protect the site. That probably makes strip mining less likely. Still, Rasmussen warns, there’s no telling whether it will occur.

Blair Mountain in Logan County was the scene of a violent encounter between upwards of 20,000 union miners and civilian supporters bent on unionizing exploited miners and state and local authorities backing the coal operators. The undeclared civil war, known as the Battle of Blair Mountain, lasted for close to a week until federal troops were called in and declared martial law. Total casualties were never revealed.

“National Register designation is a vitally important step in the preservation of Blair Mountain, a site we listed as one of America’s 11 Most Endangered Historic Places in 2006,” said Richard Moe, president of the National Trust for Historic Preservation. “Nevertheless, the threat of coal mining activity at Blair Mountain remains present, and we will continue to vigorously oppose mining efforts at the site.”

To Rasmussen, “This battlefield memorializes the beginning of a long struggle to bring the benefits of unionization to America’s working people.” Despite the standoff at Blair Mountain, in the 1930s, organizing spread among coal miners. The United Mineworkers, in turn, helped organize steelworkers and autoworkers into their own unions.

Wess Harris, publisher of the groundbreaking history of the battle When Miners March: The Story of Coal Miners in West Virginia, believes Barack Obama’s election helps explain the government’s decision. With the Bush administration gone, he said, federal officials could make a decision free of political interference. Bill Price, a Sierra Club official, agreed that five years ago the betting would have been against Blair Mountain being listed.

Earlier efforts to memorialize the battlefield foundered at the state level, owing to coal company opposition and lack of unimpeachable archaeological evidence of the battle. Even from the UMW union there was largely deafening silence about Blair Mountain. The mountain is estimated to harbor hundreds of millions of dollars worth of coal, and every ton mined means tax dollars for the state treasury and the union’s pension fund. There already has been mountaintop removal mining on part of the mountain.

For years, the position of coal companies was that few vestiges of the battlefield remained, so why memorialize it? That argument and the archaeological one were demolished three years ago, when professional archaeologist Harvard Ayers documented the presence of 15 different battle sites, trenches strung with telephone wire, and over 1,000 artifacts, including 26 kinds of rifles, shotguns, and pistols.

Perhaps more than anyone else, credit for federal intervention to preserve the battlefield belongs to Kenny King of Logan County, whose grandfather and great uncle fought on opposing sides of the battle. King relentlessly dug up artifacts buried on the battlefield, and for a decade waged a lonely struggle to save it, jeopardizing his coal company job in the process. At one point he brought over 200 photos of battle sites and artifacts to state officials, but they were dismissed because he was only an amateur archaeologist.

Eventually, a loose alliance of environmental groups called Friends of the Mountains stepped in to help King with mapping, aerial photographs, and a historical narrative. That got the ball rolling.

Still, the fight over preserving Blair Mountain may not be over. Supporters are on guard. King says the other side is talking to landowners on the mountain. Price believes the coal industry is doing so in preparation for trying to overturn the government’s decision through litigation. If they do, he said, the Sierra Club will join the legal battle.

Price added, “We have always said to the company, ‘We are not trying to keep you from your coal. If you want to mine it underground…then we’ll work with you on that. But you can’t blow up the mountain.’”

That way, he says, “They’d get their coal and we’d get our history.”

For a complete story on the history of Blair Mountain, visit www.appvoices.org/blairmountain.