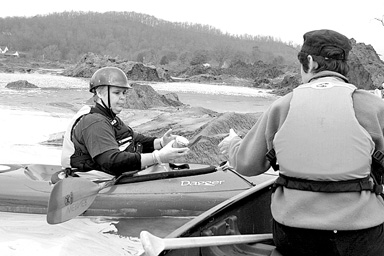 
I’m on the phone with Donna Lisenby, the Upper Watauga Riverkeeper in North Carolina, who was planning to travel to the TVA coal ash spill and collect water samples along the Emory River. I wanted to make sure she had connected with United Mountain Defense, an organization who was in the Harriman area taking water samples and talking with and providing drinking water to local residents.

She assured me she was and then offered me an opportunity I hadn’t known I was looking for. She asked me if I wanted to go with her on the river. I paused and thought hard for a moment. It seemed like something tangible that I could do. And it seemed important to go.

So at 11 a.m. the next morning, I found myself paddling up the Emory River. We quickly discovered a sheer film on the water 2 miles from the spill site. As we made our way to ground zero, the damage became more apparent. We encountered numerous dead fish, and worried about the many blue herons we saw, hoping they weren’t eating the fish, but knowing otherwise.

The film became thicker as we grew closer to the spill zone, and we discovered the turbidity curtain TVA had raised across a side cove (we later discovered that the cove led to the Kingston Fossil Plant’s intake canal, in order to protect the plant from its own coal ash waste).

The turbidity curtain made the sludge collect so thickly we could not canoe into it. We saw more dead fish. We continued past the cranes, barges and other large equipment, not one of them removing the toxic coal ash that was slowly contaminating the river. No one said anything to us as we floated by on our way to the site of the ash spill.

What we saw was unreal. What had been a beautiful free-flowing river just a few days ago was now a barren wasteland of sludge. Huge piles of coal ash, which we termed “ash-bergs,” sat in the water.

As we canoed through this sick soup of coal waste, the phrase “Coal can do that” kept running through my head. The saying, from a coal advocacy website, is supposed to be talking about how technology can make coal cleaner. But looking out at the devastation, I thought of the irony of that phrase. This is what coal had done–destroyed homes, killed fish, and altered the ecology of the Emory River for the foreseeable future. Coal can also destroy mountaintops and pollute our air from the smokestacks. Yes, coal can do that.

We were only in the “ashberg” zone a few minutes when we were flagged down by a TVA officer, who gave us warning citations for criminal trespass even though we were in waters of the United States, which are open to the public. He claimed that the US Coast Guard had put buoys indicating the river closure, but we saw no evidence of them on our portion of the river.

The irony of the TVA cop giving us a citation while islands of toxic coal ash were sitting behind him did not escape me. The real criminal act is of TVA’s doing — not implementing “global solutions” to the earlier “blowouts” on the ash containment area, not beginning the process of removing the coal ash from the spill site five days after the incident and, on a bigger scale, not moving away from coal as a electricity source when we know how harmful it is — from its burning to its waste disposal. The officer should have been writing a ticket to TVA for allowing this coal ash to trespass on waters that belong to all of us. That really is the biggest crime of all.

Another crime is letting this incident escape notice without our society taking a good hard look at what we are willing to sacrifice for “cheap” and “clean” electricity. What this disaster should show us is that coal ain’t cheap or clean, anyway you slice it (especially through that sludge).

This article first appeared on the Huffington Post blog, January 5, 2009. To view videos and photos of the sample collection trip, visit ilovemountains.org/tvaspill