[caption id="attachment_27270" align="alignright" width="216" caption="Sam Evans, who has been transporting himself on his bicycle since high school, gives someone else a lift on a bike powered rickshaw or “eco-taxi.”"] 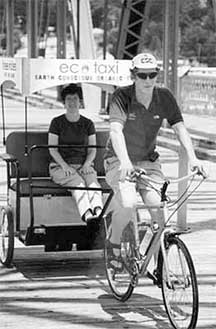 
Sam Evans’ environmental consciousness has always been linked to his bike. As a teenager growing up in Walker county, Alabama, Evans started riding in high school for transportation. “I didn’t have a car,” he explained sheepishly. Beyond simple transportation, biking led Evans to what he describes as his personal “environmental epiphany.”


While mountain biking on trails made across former stripmining sites by four wheelers, Evans reached a point where he could see across the terrain. For the first time, instead of just seeing mountain bike paths, he saw the massive and long lasting impact that strip mining has on the land. “I could see that nothing was growing back,” he said.


This January, his bike will once again play a part in Evans’ growth as an environmentalist. Now a third year environmental law student at the University of Tennessee Law School, Evans will be biking the road from Knoxville, TN to the nation’s capital in time for President-elect Obama’s inauguration on January 20. At every stop, he will be collecting letters, stories, and video footage of the people and places affected by mountain top removal. Though he admits he hasn’t figured out exactly how to get the letters onto


President Obama’s desk, he hopes to deliver them on the first day of the new administration to “elevate the priority of the issue.”


Coal has been part of Evans’ life since he was young. Where he grew up near the southern edge of the Cumberland plateau, “there is a lot of coal and a lot of strip mining,” said Evans. He explained that even though he says “I don’t really remember when exactly I became aware of mountain top removal mining,” he also says he knows that “mountaintop removal is absolutely the most immoral thing I can imagine that we allow to go on.”


The impetus for the roadtrip on bicycle came from a conversation with his sister after the election. When Evans expressed his hope for mountain top removal mining to be an agenda item for the Obama administration, she replied “What’s mountain top removal?”


[caption id="attachment_27275" align="alignleft" width="150" caption="Sam Evans has long been an avid biker both for sport and transportation. This January he will add activism and school credit to that list, when he rides from Knoxville to Washington, D.C. in protest of mountaintop removal. (Photos submitted)"] 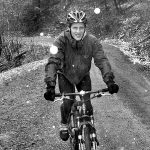 
When he expressed his frustration with the widespread lack of awareness of this important issue to one of his professors at UT, she suggested that he design an independent study. Though the journey to the inauguration is part of it, he will also be writing a law review paper on returning from Washington. The paper, using his experience on the road and the stories he collects as a narrative, will explain the methods the executive branch could use to end mountain top removal without going to Congress. According to Evans,


“If we have to rely on Congress to do it , it probably won’t happen—at least not in the short term.”


To Evans, both parts of the project are essential to understanding and communicating the impact has on people, landscapes, and communities. “There is a thin line between public interest environmental law and public interest advocacy.” With the help of his bicycle, Sam Evans hopes to practice both.


Evans would like to hear from supporters and potential hosts for his trip. To contact him: call (423) 505-8028 or e-mail seldomseensam@gmail.com. To join the cause on Facebook: Join “Voices from the Desecrated Places” using the Causes application. All donations benefit Appalachian Voices.
Categories: 2008 - Issue 7 (December) | All Posts | The Appalachian Voice