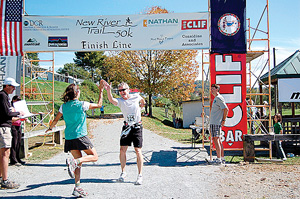 
Runners of the first New River Trail 50K (NRT 50K) began their race with foggy 48 degree temperatures on Saturday, October 11, but finished with bright skies and sunny conditions. Of the 102 racers at the start of the 50K (31.1 miles) course—known as an “ultramarathon”—100 crossed the finish line and 96 finished in the 7-hour time limit.


Race Director Annette Bednosky billed the NRT 50K as a “green” event, conducting registrations entirely online, and using minimal disposables at the race itself. Bednosky enlisted the support of the local Fries community, and featured local and homemade foods.


Bednosky also sought sponsorships from companies with reputations for environmental concern, and dedicated proceeds from the race to the National Committee for the New River (NCNR). NCNR is a non-profit organization working to protect the New River in its three state (NC, VA, WV) watershed.

Plans are underway for the 2009 event, which is scheduled for October 10, 2009. Registration will begin the 1st of the year and the race will expand to a 250-person limit. For more information on the National Committee for the New River, visit www.ncnr.org. For details on the 2008 NRT 50K visit www. ncnr.org/nrt50k.html

On Friday, January 16, 2009, the Diana Wortham Theater in Asheville will host the North Carolina premiere of the PBS series Appalachia: A History of Mountains and People, a visual narrative on the environmental history of Appalachia.


The evening will begin at 6:00 PM with a reception for the filmmakers and special guests, followed by a 7:00 PM panel discussion and screening of part one of the film, Time and Terrain. Admission to the reception and film is $50, while tickets for just the film screening are $25.


Southwings and the Southern Appalachian Forest Coalition will co-sponsor the event. All proceeds from the event will benefit the good work of Southwings and SAFC in the region.

Appalachia: A History of Mountains and People is narrated by Sissy Spacek and features breathtaking scenes of the natural world interwoven with eloquent observations from well-known intellectuals such as Pulitzer Prize-winning biologist E.O. Wilson and best-selling novelist Barbara Kingsolver as well as Appalachian activists such as Judy Bonds, Harvard Ayers and Lamar Marshall. The film is directed by Academy Award nominee Ross Spears and was produced by Asheville resident Jamie Ross.


Beginning with its geological history, Appalachia recounts the compelling story of how landscape shapes human cultures and, in turn, how humans shape the land.


To purchase tickets, visit www.dwtheatre.com or call the box office at 828-257-4530. For more information about the film and the filmmakers, visit www.appalachiafilm.org
Categories: 2008 - Issue 7 (December) | Across Appalachia | All Posts | The Appalachian Voice