“We are deeply concerned for the contamination of water that leads into the Toe River and for our grandchildren who play in this stream.” - Joe Edmisten


On July 30 in Montezuma, a small community near Newland, a right-of-way clearing crew hired by Mountain Electric sprayed dozens of trees and bushes along a creek and around a spring on Patricia and Joe Edmisten’s property. The spring is the drinking water source for both the Edminstens and their children’s family, the O’Tooles. Mountain Electric used two pesticides—Arsenal and Krenite—that, according to their labels and safety data sheets provided by DuPont and BASF, are dangerous and harmful to humans and the environment if sprayed near water. Ultimately, Patricia wants to know if pesticide contamination of the drinking water has hurt her or her family. She also wants to spread awareness about no-spray lists to avoid this situation in the future.

[caption id="attachment_26611" align="alignright" width="288" caption="The creek that supplies the Edmistens’ drinking water and forms the headwaters of the Toe River. The brown discoloration shown indicates the use of pesticides near an open water source against product directions. Photo by Sam Calhoun of High Country Press"] 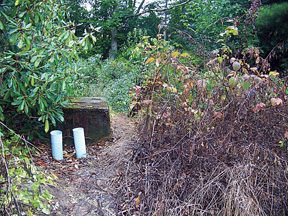 [/caption]Joe Edmisten purchased his 17-acre homestead in Montezuma in the late 1970s. Joe, his wife Patricia, and one of their children’s families, the O’Tooles, live on the 17-acre homestead; both families get their drinking water from a spring located on the property. Leading to the spring is the “Spring Path,” a quarter-mile walking path that is lined with blackberry bushes, rhododendrons, and native shrubs. On July 30, Patricia went walking on Old Montezuma Road, less than one-quarter of a mile from her home, and saw three or four workers. The workers told Patricia they worked for Mountain Electric Cooperative, Inc. Mountain Electric is a member-owned, nonprofit, Tennessee Valley Authority distributor of electricity in Johnson and Carter counties in Tennessee and Avery County in western North Carolina. At the time, Patricia said, the men were working without direct supervision from Mountain Electric.


“Saying goodbye, I breathed a sigh of relief, assuming they had not been on our land,” said Patricia. “On the return trip, however, entering what we call the Spring Path on family land, I noticed strange discolorations and slashes on trees.”


Patricia noticed that other trees were chopped off at waist height, leaving behind stakes with sharp, green-dyed points. She realized the workers had been on her land earlier in the day. Patricia instructed Joe to take pictures of the damage. She wondered why she had not been notified. “Mountain Electric provided no notification of conducting spraying…there was no warning for me not to go in that area,” said Patricia. “By the time I returned home from [a week’s vacation] on August 5, the dying of the trees was well underway. Dead leaves covered the floor of the Spring Path.”


On August 6, Patricia walked the Spring Path again and noticed that the workers had sprayed the multiflora rose directly beside the family’s water reservoir, as well as hacked and sprayed trees above the family’s spring box behind the reservoir. She took more photos.


“We are deeply concerned for two reasons—for the contamination of water that leads into the Toe River and for our grandchildren who play in this stream,” said Joe. “The sanctity of our family compound was violated.”


On August 7, Patricia and Joe took more pictures along the paths the workers took below the spring and reservoir, along the immediate sides of a branch leading from two springs—from the Edmisten/O’Toole spring and from the spring located across from the Edmistens’ property on Old Montezuma Road. These springs form the headwaters of the Toe River, according to Watauga Riverkeeper Donna Lisenby, who walked the property in September to survey the damage. 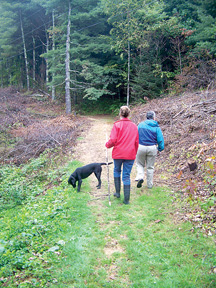 [/caption]Underneath the dead brush and plant debris resulting from the workers’ spraying, in a deep culvert downstream from the spring box, Lisenby noted the distinct sound of running water.


“How can you mistake that this is a waterway?” pondered Lisenby, as she pointed to a blackberry bush, black from death, hanging into the water, its former root system no more than 6 inches from the bank of the creek.


“Given that as of now, two families derive their drinking water from the spring, and that our grandchildren play in the branch…we were deeply concerned about Mountain Electric’s choice of practices to maintain the right-of-way. We were also angered and dismayed that no one had contacted us before the spraying,” said Patricia. “We have never contested Mountain Electric’s right to maintain the right-of-way. Our issue is how the right-of-way is maintained. We know how much Mountain Electric does for this area, especially in the winter, and we are very appreciative. This situation has put us in a difficult position of seeming unappreciative, but we have to protect our children and grandchildren.”


On August 11, after the Edmistens contacted Thacker about their complaint, Mountain Electric Newland and Roan Mountain District Manager Danny Cuthbertson arrived on the property to survey the damage. According to Patricia, Cuthbertson offered help in clearing the dying trees and dangerous stakes and said that the Edmistens could be put on a no-spray list, an option the Edmistens were told didn’t exist until now. According to Patricia, Cuthbertson said on August 11 that the chemicals Mountain Electric uses disappear quite quickly, that only one out of 1,000 customers usually complain about right-of-way clearing and that the chemicals are even used near lakes in Mountain Electric’s jurisdiction.


Cuthbertson agreed to clean up the “yard area” of the Edmisten’s property—Mountain Electric policy is to clean up debris within 50 feet of a residence—but not the “wild area” that includes the Spring Path, spring box, reservoir and two creeks.


“They need to change their attitude about what they consider a wild area and a yard area,” said Joe.


“This is a clearly marked path—only now it goes from green to brown. It’s clearly a human habitat and there is clearly running water. The whole thing is a watershed,” said Lisenby.


Patricia asked Cuthbertson if a supervisor was present when the work crew conducted the spraying and he said, according to Patricia, that the supervisor was in the area. However, the chemical’s label directions specify that a supervisor must be physically present at all times during application.


Patricia and Joe decided to take up the issue with the Mountain Electric Board of Directors.


On August 14, a Mountain Electric crew arrived to cut the stakes along the path.


On August 15, the crew returned and brought a chipper, selectively removing the hacked and sprayed trees near the Edmisten’s house. Patricia asked the crew to do the same with the dying trees along the Spring Path, but the workers clear-cut the area, leaving mounds of contaminated debris.


On August 19, Cuthbertson arrived at the property and, after speaking with Patricia, refused to clean up the contaminated brush along the Spring Path, citing policy and having to follow orders.


Also on August 19, Cuthbertson, while still refusing to clear any dead trees or debris from the wild area of the land that includes the spring box and reservoir, told the Edmistens to ask the Mountain Electric Board of Directors to direct him on his next action.


On August 25, Joe sent a letter to Cuthbertson about his qualms with calling the Spring Path a “wild area,” the designation that justified Mountain Electric’s position of not cleaning up the debris. Joe pointed out the trail, stone benches, wooden benches, railings and stone steps along the Spring Path.


On September 3, Cuthbertson arrived at the property and reinspected the damage. After further inspection, Cuthbertson told the Edmistens that Mountain Electric didn’t have a small enough chipper to get up the Spring Path and clear the debris. He told Patricia that the process would take a full workweek and would cost a lot of money, adding that other cooperative members would have to pick up the tab. Cuthbertson told Patricia he would have to describe the situation to someone else and then get back to the Edmistens.


On September 5, Thacker, Cuthbertson and Lacey—without alerting the Edmistens of their presence—arrived at the top of the property near the spring box and surveyed the damage from the roadside. Patricia was told that Mountain Electric vehicles could not reach the wild area in question and Mountain Electric could not clean up the area, despite the fact that the Mountain Electric Board of Directors instructed them to do so.


On September 8, Cuthbertson called the Edmistens and told them he had been on the property on September 5, and told them that he was sorry he couldn’t help; he didn’t understand the logistics involved in the clean up process.


Cuthbertson agreed to clean out the debris on and near one of the O’Tooles’ home site, but not on the embankment of the Spring Path, directly beside the family’s drinking source. He also agreed to pull out debris near Old Montezuma Road above the spring. Patricia asked if Cuthbertson could also pull out some debris in the branch, under the bridge below the spring box. Cuthbertson refused.


“I reminded him that what we were asking was minimal, compared to the damage done,” said Patricia.


“It’s been 45 days since the incident took place, though. What [does the North Carolina Division of Water Quality] think they’ll find?” said Lisenby.

On September 30, the North Carolina Division of Agriculture released results of the testing conducted on the Edmisten’s property. The test found 0.40 ppm of Imazapyr—the active ingredient in Arsenal—and 0.064 ppm of Metsulfuron-methyl—the active ingredient in Escort, an herbicide, on the Edmisten’s vegetation. According to Lisenby, though, the test was administered too late to document the full extent of herbicide levels.

As a last resort, the Edmistens took their plight to the press, assisted by Lisenby.

Patricia and Joe want electricity users to be aware of the no-spray option and want to encourage people to contact their local cooperative if they want to be included on the list.


According to Blue Ridge Electric Membership Cooperative Director of Community Relations Grey Sheer, BREMC offers a no-spray option to its customers. To sign up for BREMC’s no-spray list, landowners must come to BREMC’s office with a map of their property that shows property lines. The map is important, said Sheer, because it can be transposed onto BREMC maps so work crews know ahead of time where exactly not to spray. Landowners then sign an agreement with BREMC stating that they will maintain the right-of-way on their property and set up two signs—provided by BREMC—on the entry and exit points of the right-of-way.


“We would like other people in the area to know that they have the right to opt out of the spray program,” said Patricia.

Sheer added that BREMC sets up community meetings to educate members about the herbicides the cooperative uses, discussing their safety and application.


“And we don’t broadcast spray like people see DOT doing on the roads. We don’t spray rhododendrons, dogwoods; we only spray trees and plants that grow tall enough to cause a problem, and that actually helps lower plants thrive,” said Sheer.


Other than the letter sent to Patricia on August 7 stating that a no-spray list now exists for Mountain Electric, there has been no official confirmation.


“I also want people to realize that it is wrong for [Mountain Electric] to withhold information from citizens when it could be harmful to them and their family,” said Patricia. “It is too late to extract the [chemicals] from our soil, but they could have come out and removed the brush from our land and branch and near our spring. Now, we have taken responsibility for clearing any new branches that grow, but we still would like for our nature trail to be presentable.”