Story and Photos by Sarah Vig


[caption id="attachment_26617" align="alignright" width="360" caption="Tour participants inspect a small container house in Boone, NC . The house’s frame is constructed by stacking two metal shipping containers. When this photo was taken, the garage/apartment had been under construction for only 20 days."] 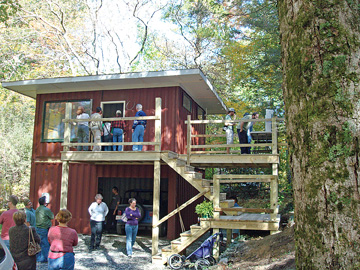 [/caption]It’s been said that the best way to lead is by example. The American Solar Energy Society has embraced this mantra with the sponsorship of a national solar homes tour. Over the first weekends in October, people all over the nation traveled to homes and commercial building that have incorporated solar technology into their design.


In the Boone area of North Carolina, Appalachian Regional Initiative for Sustainable Energy (ARISE) sponsored the state’s only guided tour. Nikki Rezvani, one of this year’s tour organizers, explained that there were a number of factors that led to their decision to host a guided tour: “Obviously, it’s more sustainable, because we use less fuel,” additionally, in her mind, tour participants also learn a lot more in a guided format, because there’s more opportunity for conversation. Ultimately, she says, “it’s also just more fun.”


To organize the tour, the team contacts local home designers and architects, as well as relying on old-fashioned word of mouth. They make a concerted effort to show off a variety of renewable or energy saving technologies and strategies. “During the planning process it’s like ‘OK, we’ve got solar, now we need wind,’” said Rezvani. The tour planners generate a “short list” each year of approximately 15 homes, and schedule visits to five of those.

Cliff Elder’s home in Banner Elk, NC is nearly brand new. He received his certificate of occupancy only two months ago. As he planned for and built his home Elder incorporated a number of elements to make his home more energy efficient. For Elder, the motivation for it was financial. “I was looking to retire and I wanted to retire cheap,” he said with a good-natured chuckle.


The house’s solar element was visible before the group even entered the house: a large window that looked in on a passive solar sunroom. During the winter especially, when the sun is lower, it shines through the window for much of the day, heating the interior.


Elder’s other method of heating, radiant heating, which operates by running heated water through pipes directly below the floor, is currently powered by propane, but according to Brent Summerville, tour director, is a system “perfect for an active solar retrofit.” When Elder mentioned to the group that he is considering solar water heating for 2009. Summerville chimed in that, “2009 is the year to do solar.” Summerville explained that incentives for solar are currently high due to the recent removal of the cap on tax credits for solar energy.

At an elevation of 5,200 feet, the Beech Mountain wind research facility has some of the best wind capacity in the area, and serves as a testing ground for a variety of small-scale turbine models suitable for home use in areas with good wind resources. 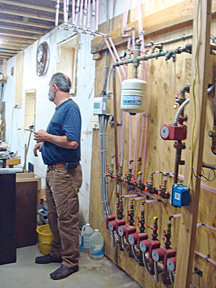 Johnny Cooke knew he wanted to do something energy efficient with the new home he was planning on constructing. In order to research the possible options available to him, he did the same thing many of us do when we have an unanswered question: “I googled ‘energy,’” he said, “and this came up.” What he found was the innovative Enertia house, designed by Micheal Sykes.


The house’s design is based on the use of southern yellow pine as a sort of “thermal battery;” because of its high rosin content, the wood can absorb and

store thermal energy. Combining this with the basic principle of convection, the house can virtually heat itself, provided a little bit of sunshine.


In the Enertia house, there is constant circulation of the air that is heated by solar energy. “It’s the benefit of passive solar circulated through the whole house,” explained Emily Will, Sykes’ partner in business and in life. According to Will, there have been almost 90 Enertia houses built in the U.S. so far, spanning across 26 states.


The house itself is constructed from interlocking blocks, roughly analogous to a life-size, energy-saving Lincoln Log™. According to Sykes, who was on site for the solar tour, the Enertia home it could be the “cheapest house on earth” if the Enertia blocks were mass-produced.


Beyond the benefits of the house itself, Cooke plans to mount photovoltaic panels on the roof for an additional 1.3 KW of energy, as well as solar water heating, which will provide both his domestic hot water, and the water for radiant floor heating. The radiant heating will act as a “Plan B” for heating the house, a back-up in case the weather is cloudy for a few days. Cooke also has a Plan C, a wood-fired stove in the basement.

The only commercial property on the tour, the Green House, an office building located in downtown Boone, is hoping to become one of the first LEED-certified buildings in the county. A few of their sustainable design elements include solar tubing, which provides natural light for the entire office, and denim insulation.


[caption id="attachment_26620" align="alignright" width="288" caption="Tour participants Donna Lisenby (left), Nita O’Brien (center), and tour organizer Nikki Rezvani (seated, right) marvel at the view and the warmth in Elder’s passive solar sunroom. The rock in the wall behind them was salvaged from the site, and helps retain heat"] 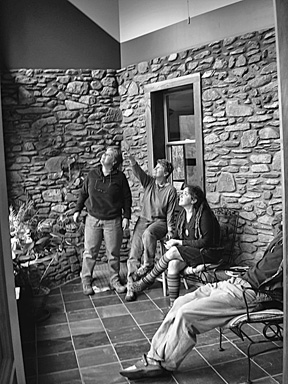 David King from Constructive Solutions, has a lot to brag about when it comes to one of his current projects. It will take little more than a month to finish, it’s extremely affordable at around $100 per square foot, and it’s definitely green (and that isn’t referring to the paint). Not to mention it’s the first of it’s kind to be built in North Carolina.


The small garage apartment just up the hill from ASU’s campus is constructed from metal shipping containers salvaged from a port on the South Carolina coast. It “would be garbage if we hadn’t used it,” said King.


Property owner Ethan Anderson has been researching container houses for two or three years, and had seen examples of other, similar homes online. It wasn’t until he went to the shipping yard, and touched the containers that he thought with conviction “We can do this!” Soon after, he began plans to state’s first residential, non-military container home on some extra space on his lot. He also formed a business, dwellbox, to promote the construction of more of these homes.


“Affordable housing was really the draw,” he explained. Anderson’s hopes that the container apartment can become a model for others looking for affordable housing solutions; “half the thing is education” Anderson concluded.