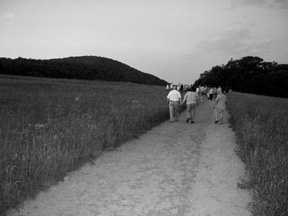 It may be ambiguous, mind you - all this stuff about ghosts. And it might be only your imagination, you see - this idea that you can stare up into the night sky and see figures or shadows or just-plain-something in the windows of the Moses H. Cone Manor House.


But maybe there is something.


Oh, come on! There has to be something - or at least there was definitely something that captivated a crowd on a summer’s night in 2008, as folks gazed up at the windows of the Flat Top Manor, the summer home of a wealthy textile magnate named Moses H. Cone. Some kind of shadow moved, it seemed, across one of the top windows. It was strange, certainly. But, as a tour guide stated clearly that night, this house was locked. Nobody was inside. And whatever you would have been looking at in the window, well, there was really no explaining it.


But what about the house? Well, it is lavish, to be sure: a Colonial revivalist structure, dating to the late 1800s. Despite its grand size, though, it was simply a summer home for Cone, the industrialist, and his wife, Bertha.


Mr. Cone died at a young age, and he was not to sleep in eternal slumber peacefully. Thieves dug his corpse out of the ground in 1924 and tried to ransack his coffin for leftover jewels. Even today, people debate over where Mr. Cone’s body has been re-interred.


A hiking tour guide, Sandy Adair, rolls through this story almost by routine as she leads a group of visitors on a Sunday evening. Adair serves the National Park Service as an interpreter. At the manor, a crowd of nearly 50 people have come out to listen to Adair, all wanting to hear more about the Cones coming to the mountains of North Carolina and hiring local folks to keep their hillsides groomed.


This hike in the highlands leads through a pedestrian tunnel, slips past farm fields, and glides beneath ancient oaks, crossing grassy plains. The path of this old carriage road - part of the manor’s 25 miles of trails - offers an especially scenic quality. And why not? This is, of course, the Blue Ridge, one of the most spectacular settings of the Appalachian Mountains, and hardly a square inch can be deemed anything but just plain pretty.


Cone, it is said that mysterious lights could be seen flashing here. Another tale says Moses and Bertha’s pictures could once be found tilted toward each other.

Adair, while leading her tour, spills out details of how Bertha detested the idea of the Blue Ridge Parkway taking her land. Leading a charge uphill, along the old carriage road, this tour group eventually reaches the gravesites of the Cones, right about dusk. As one story goes, Mr. Cone chose his gravesite even before his chose the site of his home. As for Bertha, she died in 1947, and it has been said that her spirit might inhabit the home and the grounds.


At least once, that spirit has been tested. Once, legend says, a craftsman working at the Cone Manor House decided he would sleep in Bertha’s old room. That night, the craftsman proceeded to wedge a chair against a closed door. And the next morning? Well, according to the legend, this man found the chair on the other side of the room - and he found the door open again!