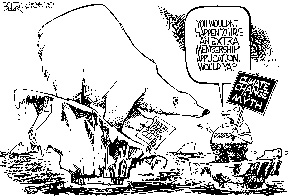 When Rome destroyed Carthage in 146 BC, do you suppose they tried to sell their citizens on the virtues of salty land? Did they tell them that the salt-laden fields of Carthage were just brimming with opportunities for new hospitals and businesses?


If that sounds absurd, consider this bit of rhetoric from Kentucky:

“A lot of people look at mountain top removal [mining] as a negative, but I see it as a positive,” said Kentucky Lieutenant Governor Daniel Mongiardo on July 31. “We need to stop apologizing for coal ... I want us to promote mountaintop removal, because we need flat land. We can not have economic expansion without places to do things and part of mountain top removal is for places like hospitals, airports and different type of merchants.”

Mongiardo goes on to say that he also wants to promote tourism in Eastern Kentucky, which is “one of the most beautiful areas in this country.”


Any thinking person would recognize that mountaintop removal mining is, in effect, a Carthaginian solution to the energy problem. The devastation from mountaintop removal mining is so complete that the land will never be useful to future generations. Water from MTR land is so poisoned by selenium and other heavy metals that it is effectively destroyed as a resource. The stability of the land is so deeply undermined that structures foolishly built on MTR land soon have broken foundations.


The devastation could not be more complete if the coal industry scattered tons of salt over the “reclaimed” mountaintop removal sites, leaving them the way the Romans left Carthage.


The coal industry and some business interests may argue that the sacrifice is profitable or even necessary, but nobody in their right minds would argue that it is a thing of beauty.


It only goes to show that you just can’t have it both ways. You can’t have beautiful mountains and mountaintop removal mining. You can’t have ecotourism and destruction side by side. You can’t have short-term exploitation and long-term employment. You can’t scatter salt over Carthage and then sell the land in Rome.