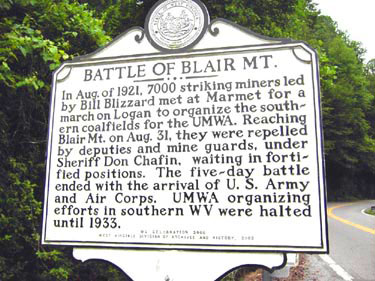 A historic marker tells passerbys the story of the Battle for Blair Mountain.

On June 29, the site of the Blair Mountain labor conflict in southern West Virginia was placed back on the National Register of Historic Places after years of legal action led by environmental and historic preservation advocates.


The 1,600-acre battlefield was originally listed on the register in 2009, but was delisted nine months later due to successful lobbying efforts from Alpha Natural Resources and Arch Coal. In 2016, a federal judge declared the removal to be unlawful.

Combined, the two coal companies hold three mountaintop removal coal mining permits that overlap the battlefield. “The listing decision imposes significant restrictions on the ability of permittees to mine within the listed area, and may prevent any mining altogether,” states Sierra Club Senior Attorney Peter Morgan.

“This victory is the culmination of a 12-year saga that took many legal twists and turns along the way in our efforts to save this part of West Virginia’s history,” Regina Hendrix, volunteer at the West Virginia Chapter of the Sierra Club, said in a statement. “Sustaining legal and activist action over such a long period requires unconditional commitment from fellow West Virginians, in particular Kenny King and Wilma and Terry Steele along with other coalition members.”

In 1921, more than 10,000 coal miners marched for the right to unionize the southern coalfields. On August 31, 1921, they were met by 2,000 armed deputies and mine guards at Blair Mountain. The battle lasted for five days and ended with the arrival of the U.S. Army and Air Corps. Dozens of people were killed. This remains the largest organized armed uprising in the United States since the Civil War.