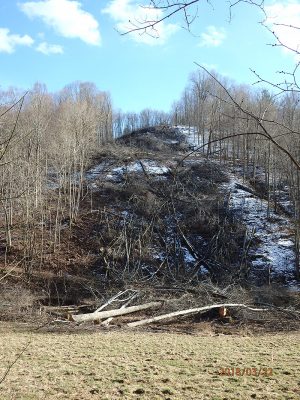 M. Beram describes her home as set back in a skinny West Virginia hollow, surrounded by woods. Some days, the only traffic comes from the mailman and a few neighbors further up the dirt road commuting to and from work. It’s quiet, and that’s what she prefers.


But over the past several years, two gas compressor stations within a mile-and-a-half radius have interrupted that tranquility, and preparation for the Mountaineer XPress Pipeline has begun just several hundred feet from her home and driveway.

After watching the gas industry’s footprint expand in Doddridge County, Beram wasn’t surprised to learn that a major fracked-gas pipeline was headed her way. The Mountaineer XPress Pipeline’s right-of-way runs through two of her neighbors’ land along her property line, so Beram receives no compensation.

“I knew what to expect,” she says. “But I also know what my rights are and I’m not afraid to speak up and ask questions and report everything that I see that’s wrong. But it’s just another time hog.”

“I can choose to ignore it, but the other aspect is my property value is shot,” Beram continues. “I want to get out of here, but who in their right mind would purchase a piece of property in the blast zone?” 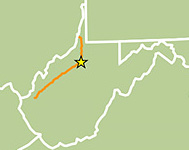 M. Beram’s location in the path of the Mountaineer XPress Pipeline.

This fall, crews began widening her narrow road and straightening out curves, a process that involved removing 100 dump trucks full of dirt from the hillside each day for nearly a month. Beram expects that the increased traffic on her dirt road — and the resulting dust — will be a major nuisance.

She also worries about an accident. The Mountaineer XPress is slated to run through a nearby field that has an older, conventional gas well and related smaller pipelines, plus Beram’s buried phone and electric lines. And she’s concerned that the process of burying pipe could disturb her reliable drinking water well. Though she asked the company to test her drinking water well, and they complied, she notes that they did not test the recharge rate.

“What really is the kicker is we’re suffering through this whole B.S. process, and the gas is slated for export,” she adds.

The incoming pipeline is only part of the reason she wants to move. Air quality in Doddridge County has worsened as fracking wells, compressor stations and other facilities have multiplied, Beram says, and now she has periodic breathing problems that improve when she leaves the area.

“You shouldn’t have to spend all of your time fighting to try to save something that it should be your natural right to have,” she says. “We should be entitled to clean air and clean water without having to fight for it.” — By Molly Moore