Andrew Grigsby is a leading sustainability consultant with more than 25 years of experience in residential construction and green building. But ask him what motivates his work to foster a more ecologically and socially sane world, and he’ll likely go back to his upbringing in Culpeper, Va. 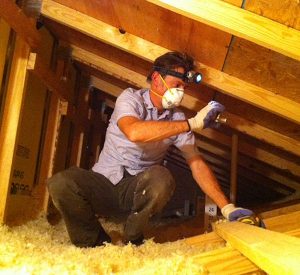 Before starting Commonwealth Sustainability Works, his Rappahannock, Va.-based sustainability consulting firm, Grigsby worked for years as as a carpenter and remodeler, mastering many of the hands-on skills essential to his field. After attending graduate school in Texas, he managed the Sustainable Communities Initiative of the City of Austin, where he expanded his expertise on topics ranging from green building to regional sustainability planning.

While a larger strategy for sustainability is important, Grigsby says on a day-to-day basis what allows him to “stay sane” and operate a business is addressing individual issues in the form of opportunities. According to the company’s website, Commonwealth Sustainability Works relies “upon the notion that each of us has a responsibility to adjust our consumption to a level that might conceivably be sustained by the resources of our planet.”

“Being wasteful is counter to most people’s ideals, and I think it’s unhealthy to live in violation of one’s ideals,” says Grigsby. “If you know something is bad and you keep doing it, that’s an incongruency that wears on your psyche and on your soul.”

But for Grigsby, acknowledging the obstacles to reducing energy consumption is a step in the right direction. He shares his vision of sustainability across the region, educating groups in classrooms, community halls and conference centers.

“Sometimes I feel like I’ve got the cure for the common cold and I’m just trying to get people to listen,” says Grigsby. “When you’ve got that, you want to share it.”