Bidding Farewell to a Mountain of a Man

Larry looking out over the devastation on Kayford Mountain with his dog, Dog. Photo by Mark Schmerling

Larry Gibson was an exceptional man – a warrior for the mountains that he loved, an advocate for justice, and a mentor to the thousands of people all across the country who joined with him in his struggle to end the daily tragedy that is mountaintop removal coal mining.

I first met Larry in the early summer of 1998, climbing out of a pickup truck that dwarfed his five-feet-two frame. I had received a call from professor Harvard G. Ayers, the founder of Appalachian Voices, describing to me the devastation that was taking place in the mountains of Central Appalachia and asking if I would travel to see the tragedy first-hand. At that time nobody had heard of mountaintop removal coal mining and there was almost nothing written that described the practice or its terrible impacts on the ecology and the local communities.

The drive through Coal River Valley in central West Virginia was a sobering experience, with processing plants, giant conveyor belts and mounds of coal looming over dust-covered homes lining the road along the narrow valley floor. In the small town of Whitesville, retired teacher Janet Nease met me and immediately told me there was someone she very much wanted me to meet. 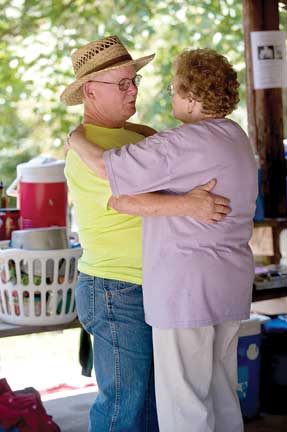 Dancing with his wife Carol at Stanley Heirs Park. Photo by Carl Galie

Larry, while short in stature, was not afraid of sharing his opinion with anyone. As we drove the winding dirt road on the way up to his family’s land on Kayford Mountain, he talked low and fast in a thick Appalachian accent about what he was taking me to witness. “See them big rocks in the middle of the road,’ he said, pointing over the dashboard. “Well, them are fly-rock, and they come from the mine site when they start a-blowin’ up my mountains!”

He led me to the edge of his property, past his family’s cemetery, to a sweeping overlook of the environmental devastation that surrounded his home. After that moment, looking at the moonscape that used to be mountains, I knew I couldn’t turn away from joining Larry’s mission.

After that day in 1998, Larry and I shared many more experiences. We attended countless meetings in West Virginia, Kentucky, southwest Virginia and Tennessee, and strode through the endless halls of Congress to garner support for legislation that would end mountaintop removal. Through the press conferences and committee hearings, the briefings and meetings — through it all, Larry was tireless in his quest to educate the entire planet about what was happening to his beloved mountains.

Larry was loveable and made friends easily wherever he went. For more than 20 years, he traveled the country speaking to colleges, community groups, and whomever would listen to the plight of the folks living in the shadow of mountaintop removal. Young people were drawn to Larry, who was always quick with a big smile or a joke, and students from all over the country took up his cause, building an army of young citizens united against injustice.

He continued to work on his land on Kayford Mountain, adding a stage area and camping spots, creating in Stanley Heirs Park a place where people in the movement would gather to celebrate July 4 or the changing of the leaves each fall and revel in their common cause. 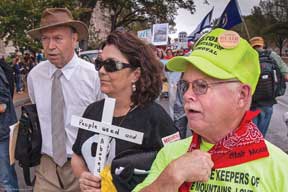 Larry never quite received the notoriety and appreciation he deserved. Although CNN network interviewed him as part of their “Heroes” series, and Terry Tempest Williams wrote an article about him and Kayford Mountain for The Progressive magazine, he remained to most folks “just Larry.” Fame outside of the anti-mountaintop removal
movement was not a concern, though, because to him what mattered was that the coal companies stopped hurting his people and his ancestral land.

Larry is gone now and I for one will miss him. I am sure that there is a special place in heaven for such a mountain of a man. I can still hear his voice every day shouting to me and anybody who will listen:

“They’re blowin’ up our mountains and there oughta be a law!”

To read more about Larry’s legacy or make an online donation, visit:
mountainkeeper.blogspot.com
You can also send mail to: Keeper of the Mountains Foundation,
179 Summers St, Suite 234, Charleston, WV, 25301