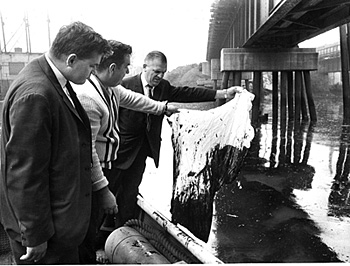 Councilmen from Cleveland, Ohio , examine a white cloth that came up dripping with oil after being dipped in the Cuyahoga River in 1964. The river notoriously caught fire in June 1969, bringing it national attention and leading to renewed efforts toward improving water quality (Photo by Jerry Horton).

Forty years ago, it took a flaming river to spur our nation to protect its waterways.

The river that played a prominent role in the creation of the Clean Water Act and the Environmental Protection Agency is thought to have erupted in flames on thirteen separate occasions in a one-hundred-year period, ending with a conflagration in June of 1969 that captured the attention of Time magazine, and subsequently the rest of the country.

At the time, Ohio’s Cuyahoga River was so choked with industrial runoff it displayed no visible signs of life for miles. In a March 11, 1970 article, Time magazine described the river as “Chocolate-brown, oily, bubbling with subsurface gases” and “a constant fire hazard” due to the large quantities of oil and other pollutants smothering the surface. The ‘69 fire, which nearly destroyed two railroad bridges, was not even the largest the river had endured.

Sadly, the problem was not contained to the Cuyahoga. Due to lax water regulations, industrial pollution at the time was rampant in streams and lakes. Bacteria levels in New York’s Hudson River were 170 times the safe limit, and Lake Erie was, according to the same article in Time, “in danger of dying by suffocation.” 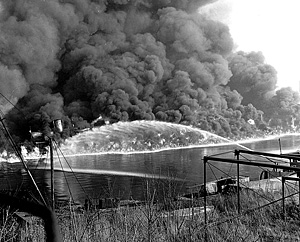 An environmental senator from Maine led the charge on the 1972 federal bill, and despite a veto from then-President Richard Nixon — overridden by both houses of Congress — forty years ago the Clean Water Act was born.

Flash forward to the present, and we see a country struggling once again with laws governing the health of our national waterways. Make no mistake, the nation’s rivers and lakes are far cleaner than they were pre-1972, when drinking water standards were non-existent and wholesale industry straight-piping commonplace. But as Carl Pope of the Sierra Club told PBS journalist David Brancaccio in an 2004 interview, “For the first time since the Clean Water Act was passed…EPA reported last year that America’s waterways are getting dirtier.”

In the 2002-2003 study Brancaccio referenced, 39 percent of the nation’s streams were listed in “poor biological health.” That number rose to 42 percent in the agency’s 2006 report, with 55 percent of streams in Southern Appalachia receiving a “poor” rating.

Mercury pollution has also experienced a dramatic increase. Scientific findings by the Eighth International Conference on Mercury as a Global Pollutant found that, “on average, three times more mercury is falling from the sky today than before the Industrial Revolution 200 years ago,” and a 2009 EPA study found that tissue in game fish exceeded health-based limits of mercury in 40 percent of U.S. lakes.

New threats arose in the 2000s as well. A massive spill from a Harriman, Tenn., coal-fired power plant into the Clinch and Emory rivers in 2008 prompted the EPA to investigate toxic coal ash — an arsenic-laden byproduct of burning coal that has to date been treated as no more dangerous than household garbage. EPA efforts to regulate coal ash have received tremendous backlash from industry groups and pro-coal representatives in Congress.

In fact, since 2010 and the start of the 112th congressional term, industry-friendly representatives from both the Senate and House have waged what seems like a full-on war against the Clean Water Act and the EPA. Bills such as the Clean Water Cooperative Federalism Act of 2011 (H.R. 2018), which environmental groups dubbed the “Dirty Water Act,” the REINS Act (H.R. 10) and numerous amendments attached to the 2011 Federal Budget all attempted to eliminate the EPA’s ability to regulate federal clean water and other environmental laws and remove barriers to repeating mistakes of the past.

Forty years ago, it took a flaming river to spur our nation to protect its waterways. What will it take today?