Call them the environmental movement’s equivalent of an emergency response team. Within only 14 hours of the dam failure at the Kingston Fossil Plant, United Mountain Defense mobilized. Having gained years of experience organizing and conducting water sampling in communities throughout Tennessee impacted by mountaintop removal mining, and with headquarters in nearby Knoxville, UMD was uniquely positioned to be on the ground at the disaster site and to get there fast. 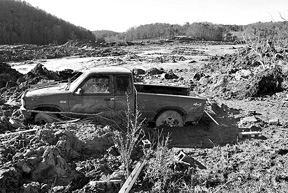 The first thing UMD volunteers organized were door-to-door listening projects to determine the needs of the impacted community. There was an “overwhelming response that people liked to be listened to,” according to Bonnie Swinford, one of UMD’s lead organizers. Through these projects, the UMD volunteers found that people “knew very little about what was happening at the plant and what was in the fly ash,” Swinford said.

Following the listening projects, UMD began a number of efforts to address residents’ concerns. They printed and distributed copies of informational material, which helped elucidate what materials the fly ash contains, they also began distributing bottled water, collected water samples at a number of sites around the spill area, and organized the first community meeting on January 3, 2009. But that was just the beginning.

They are working now to train the residents themselves to take on the community organizing that UMD initiated following the spill. Matt Landon, a full-time volunteer staff person for UMD recounted giving a “documentation pep talk” to a resident who approached him with a concerning story following one of the meetings UMD helped organize. “If there’s any way you can get out there with a camera and just document what you’re seeing, that will be really important,” Landon told the man, who said he had seen a dump truck washing the coal ash off into the front yard of his relatives. 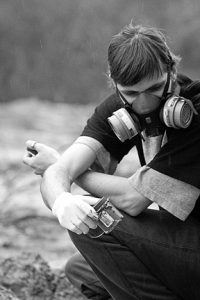 Matt Landon, a full-time volunteer for UMD is shown here taking ash samples to be tested, one of the many activities initiated by the TN-based grassroots group. Photo courtesy of United Mountain Defense.

Currently, one of UMD’s primary projects is ensuring accurate air quality monitoring is being conducted using the proper equipment. Landon and members of TCASN are training on how to construct and use low volume air monitors that are housed inside a five gallon plastic bucket (for more information go to www.bucketbrigade.net). Landon says the greatest challenge they have faced since coming to the area is “getting the regulators to take up their responsibility in holding TVA responsible to cleaning this disaster up in the best way.”

In some ways the TVA coal ash disaster has turned some residents into activists virtually overnight. What was once a “sleepy little community” has become an epi-center of the environmental justice movement, and its residents are “ready to debunk the myth of clean coal,” according to Swinford. UMD says its plans are to continue working with the residents of Roane County as long as they can. “We’ve made lots of relationships and friendships,” Swinford says. “This will just be one more coal impacted community that we will continue working in.”