Virginians For Justice: PROGRESS NOT PIPELINES! 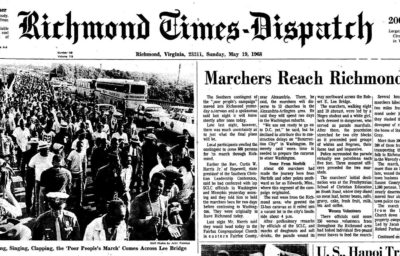 On May 18, 1968, scores of people marched across Richmond’s Lee Bridge as part of the historic Poor Peoples’ Campaign.

On May 17 and 18, Virginians from all across the state will unite in common cause to oppose unjust and unneeded fracked-gas pipelines anywhere in the Commonwealth, and to stand in solidarity for environmental justice and the climate. Events on both days will include notable speakers, music by the SUN SiNG Collective of ARTivism Virginia with puppets bigger than cars, and other activities. The SunBus, powered by solar panels, will provide energy for the sound system. Up-and-coming string musician Rachel Eddy with also perform on May 18.

May 17, 11 a.m. – 2 p.m., Richmond
End Environmental Racism Now: March with Union Hill
**Due to an unavoidable change in his schedule, Rev. William Barber II is unable to attend.

Join members of the Union Hill community and others as we rally with William Barber III, Co-chair of the N.C. Poor People’s Campaign Ecological Justice Committee and an associate with The Climate Reality Project, and Karenna Gore, Director of the Center for Earth Ethics, and Pastor Paul Wilson, of Union Grove Baptist Church. We will march across the Robert E. Lee Bridge along the same route that civil rights advocates marched 51 years ago almost to the day during Martin Luther King, Jr.’s 1968 Poor People’s Campaign march to Washington D.C. for economic justice.

This year, we’ll be marching for environmental justice in Union Hill, a historic black community in Buckingham County which Dominion Energy has targeted for a massive compressor station as part of its Atlantic Coast Pipeline. We’ll also be rallying for an end to the Mountain Valley and Atlantic Coast pipelines and all new natural gas infrastructure anywhere in the commonwealth.

Rev. Lennox Yearwood, president of the Hip Hop Caucus, with join the rally and concert to stop construction on the pipeline. Virginians will gather at the courthouse in Attorney General Mark Herring’s hometown to ask him to stand with Appalachia, halt work on the MVP, pursue his lawsuit against the pipeline for hundreds of water quality violations, and stand up for the state’s authority to revoke the project’s water quality permit.

In addition to Rev. Yearwood, speakers include Karenna Gore, Delegates Chris Hurst, Elizabeth Guzman and Sam Rasoul, and Professor Emily Hammond, George Washington University Law School. They will stand shoulder-to-shoulder with a large community from Southwest Virginia with allies from Northern Virginia and across the state to demand that construction stop on the pipeline.