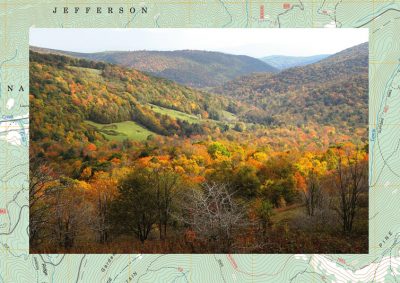 The company behind the Mountain Valley Pipeline wants to destroy a large swath of the Jefferson National Forest in Virginia’s mountains to build the unneeded, fracked-gas Mountain Valley Pipeline. The U.S. Forest Service is considering breaking 11 of its own conservation rules governing old-growth forests, scenic viewsheds, soil health and more to accommodate a for-profit company.

Public forests shouldn’t be destroyed for private gain. Ask the Forest Service to select its proposed Alternative 1, for “No Action,” and reject the 11 proposed amendments to prevent unnecessary damage to Jefferson National Forest!

Tell the U.S. Forest Service not to allow the destruction of public forests for private gain (Sign below!)

The Mountain Valley Pipeline (MVP) and Equitrans Expansion Project Draft Supplemental Environmental Impact Statement (SEIS) #50036 proposes amendments to 11 crucial standards that are essential for protecting the Jefferson National Forest. The proposed changes to standards for soil health, old-growth forest, forest edge, species competition and scenic viewshed standards would bring significant harmful impacts to the Jefferson National Forest. These changes serve as conveniences for the fossil fuel developer, to the detriment of lands that are held in the public trust.

Although the U.S. Forest Service posits there are two alternatives — (1) no action, or (2) rewriting the rules — there is only one acceptable path: taking no action and avoiding harm to the Jefferson National Forest. Allowing the Forest Service to break 11 of its own rules to accommodate a for-profit company sets an alarming precedent for similar rule-breaking on national forests across the country. These allowances run counter to the Forest Service’s mandate to “sustain healthy, diverse, and productive forests and grasslands for present and future generations.”

The draft SEIS makes the unsupportable argument in its suggestion to change amendment FW-248 of the National Forest Management Act that the “beneficial effect” of MVP is the “same as the effect of the proposed action,” or that the economic benefit for a private corporation justifies environmental disturbance on public land. This stance presumes that the project will be operational, despite the project’s ongoing legal setbacks and financial uncertainties, and it perpetuates the false narrative that the MVP is needed for domestic use. MVP’s purported need, announced in 2016, has not surfaced, as domestic demand for gas continues to be flat. Altering amendment FW-248 sets a precedent that could encourage additional unneeded fossil-fuel infrastructure across the Forest Service system, as it equates beneficial effect with economic development that is highly speculative at best. Further permissions for future projects means further cumulative impacts to waterways and soil on national forest land.

There are six soil and riparian standards in the Jefferson National Forest plan (FW-5, FW-8, FW-9, FW-13, FW-14 and 11-003) that would need to be permanently altered to allow the MVP to be constructed. These alterations exempting the operational right-of-way and construction zone of the MVP are blanket, open-ended exceptions that should not be considered. Although the draft SEIS states that there would only be minor and temporary adverse effects to soil compaction and riparian habitats, altering the basic soil structure in the path of the pipeline would cause permanent, long-term changes in the way the soil holds water. Compacted soils alter root growth, change vegetation types and increase runoff. These impacts would be difficult to mitigate, as maintenance activities would amount to repeated harm to the environment in the active right-of-way of the pipeline. Riparian zones are protected areas due to their unique ability to buffer waterways from sediment and nutrient runoff, stabilize banks, shade and regulate stream temperatures, and provide much of the food sources for river ecosystems. Allowing clearing and construction in the streamside corridors circumvents this protection, and furthermore, it significantly increases the possibility of continued water quality degradation from sediment loading.

To date, improper and inadequate sediment and erosion control practices during construction along the route of the MVP have led to more than 300 water quality violations in Virginia, which have been the subject of an enforcement action by the state’s Attorney General.

The proposed amendments that would impact the Appalachian National Scenic Trail and the Scenery Integrity Objectives make the same false assumption that the project is inevitable and that mitigation is the only available option. The amendment to 4A028 acknowledges that the project would have adverse impacts, but incorrectly minimizes the severity of those impacts on these public resources. Boring under the trail would result in lasting impacts to the geology of the area and negatively impact groundwater supplies. The listed “minor” temporary adverse effects from noise, dust and visual intrusions are more harmful than summarized. Sustained noise during construction is disruptive to species’ communication, predator avoidance and effective use of habitat. Sound disruptions would be intensified as the developer rushes to give the appearance of meeting repeatedly delayed project timelines.

The amendment to FW-184 allows an alarming five-year window after completion of the construction phase for MVP to attain the current Scenic Integrity Objectives for the crossing. Within that time frame, the project may be abandoned, and mitigation of damage from the crossing may not occur, as MVP is a limited liability company. Granting exception after exception for the Mountain Valley Pipeline, excluding it from the Forest Scenic Integrity Objectives Maps’ governance and giving significant allowances for mitigation timelines would have long-term, harmful consequences to the natural resources and recreational assets of the Jefferson National Forest, and would set a dangerous precedent for all national forests.

For the reasons stated above, I ask that the U.S. Forest Service select Alternative 1, for “No Action,” and reject the 11 proposed amendments to prevent unnecessary damage to Jefferson National Forest.