“These destructive pipelines were climate catastrophes and economic boondoggles from the start. They weren’t needed when they were proposed, and they’re even less needed now.” — Jessica Sims, Appalachian Voices Virginia Field Coordinator

For almost six years, Appalachian Voices fought the destructive 600-mile Atlantic Coast Pipeline in communities, the courts, and in our state capitals—until a sunny day last July, when the monopoly utilities behind the project, Dominion Energy and Duke Energy, abandoned the $8 billion boondoggle, heralding a shift toward a much cleaner energy future for the entire region.

The project’s downfall stands as a milestone in the modern environmental justice movement and exemplifies the power of a multi-racial, multi-generational coalition united against the injustices that undergird our nation’s energy policy. The role that frontline communities like Union Hill, Virginia—a historic Black community and the planned site of a massive pipeline compressor station—played in this shared victory cannot be overstated.

Many observers were skeptical that pipeline opponents would, or even could, win this fight. At times the political sway of monopoly utilities and the eagerness of state and federal agencies to greenlight new fracked-gas projects seemed insurmountable. But we forged ahead and helped to build a grassroots movement that eventually overwhelmed Duke, Dominion, and the Trump administration’s attempt to build more unnecessary fossil fuel infrastructure at the public’s expense.

As we double down to defeat the Mountain Valley Pipeline and the MVP Southgate extension into North Carolina, we’ve also strengthened environmental rules in Virginia to remedy the permitting and enforcement flaws that have put communities, clean water, and ecosystems at a disadvantage. 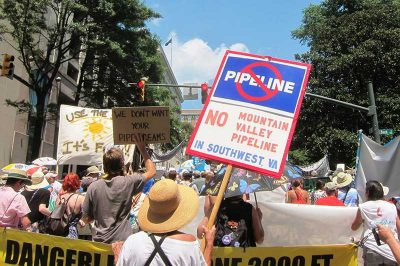 The legal challenges Appalachian Voices and our allies have brought against the 303-mile Mountain Valley Pipeline have compelled federal courts to block defective permits issued by industry-friendly agencies. Last November, judges sided with our coalition and stopped pipeline construction through 1,000 streams, rivers, and wetlands in Virginia and West Virginia until the court could rule on our case.

Rather than suffering another legal defeat, pipeline developers announced in January that they would abandon the one-size-fits-all federal permit and seek individual state permits to cross waterways. This more time-consuming approach has created an opportunity to defeat the Mountain Valley Pipeline once and for all. Delays have led to mounting costs approaching $6 billion—up from $3.7 billion three years ago when the project was scheduled to be completed by the end of 2018.

Federal regulators signed off on the 73-mile MVP Southgate extension last year despite the threat of the same negligent practices exhibited by the Mountain Valley Pipeline. But the project’s fortunes shifted in August when, in response to demands from Appalachian Voices and our allies, the N.C. Department of Environmental Quality denied a Clean Water Act permit for MVP Southgate, citing the unnecessary risk it would pose to clean water when the path forward for the Mountain Valley Pipeline itself remains so uncertain.

When MVP Southgate took the state to court to challenge the decision, we teamed up with Sierra Club and the Center for Biological Diversity to defend it. This past March, judges ruled that while environmental regulators did not adequately explain why they rejected the permit, the decision was consistent with North Carolina’s authority under the Clean Water Act.