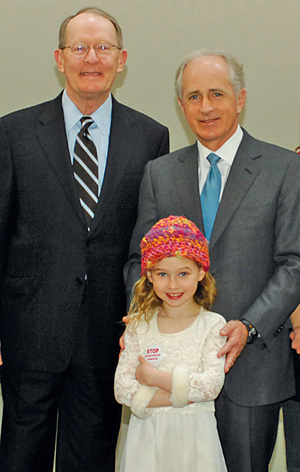 The Littlest Volunteer That Could

Since she was four years old, Olivia Stegall has been volunteering with Appalachian Voices and working to end mountaintop removal coal mining in Appalachia. Her first foray into advocacy was in 2006, when she traveled with her mother to Washington, D.C., to ask members of Congress to help end the practice.

Now almost ten years old, Olivia has talked personally with dozens of Senators and House representatives about the issue, and one time even accompanied Rep. Phil Roe (R-TN) to the Capitol to watch the House vote on a bill. “When I was really little, I didn’t think about where I was, I just asked (them to support the Clean Water Protection Act). But when I got older, I was realizing what I was doing, and just how important it was.”

The youngest volunteer for many years at Appalachian Voices, Olivia incorporates many of her volunteer hours as part of her homeschooling, helping to send letters, mail out The Appalachian Voice, and input data into our computer systems. She also regularly helps out at her local humane society and is a Cadet in the Girl Scouts.

Most recently, Olivia was one of the youngsters featured in our No More Excuses video campaign, produced in conjunction with the Alliance for Appalachia, to ask President Obama to end mountaintop removal coal mining for good.

“When I turned six, I really just wanted to make a change in the world,” Olivia says, “because not everyone has a good environment and it would be nice if everyone had that.”