Matt Grimley was our AmeriCorps Project Conserve Outreach Associate for 2012-13, serving as Associate Editor of The Appalachian Voice as well as the education coordinator for AV's Red, White and Water campaign. 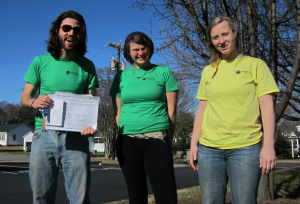 The Red, White & Water team hit the streets near Belmont, N.C., to speak with residents who live near Duke Energy's G.G. Allen Steam Station about the threats of coal ash pollution.

Last Saturday, the Red, White and Water team traveled to Belmont, N.C., to the G.G. Allen Steam Station for a day of canvassing. Walking door-to-door, we asked residents of the communities near the coal-fired power plant if they had been impacted by water pollution.

I met Archie Dixon, who was featured in the Gaston Gazette a few months ago. Dixon had complained to Duke Energy, which owns the power plant, about coal ash staining his property and getting into his drinking water. I spoke with him while he and his grandson (also named Archie, or “Lil’ Arch”) waited for a plumber for a broken pipe on their property. In his garage sat a waist-high stack of bottled water. Mr. Dixon said that he still refuses to drink his own home’s water.

The pollution near the plant happens in two ways. One is through coal ash ponds. Coal ash is the waste byproduct from burning coal and it contains contaminants such as arsenic, mercury and chromium. Because the one active coal ash pond at G.G. Allen is an unlined impoundment, these toxics can seep into groundwater. Tests near the plant have revealed exceedances in manganese, iron and nickel in the groundwater.

Effluent is the other form of pollution at G.G. Allen — the plant wastewater that discharges directly into the surface waters of nearby Lake Wylie. Under the Clean Water Act, permits are issued for each of the plant’s discharge points. These permits, however, only set limits for traditional pollutants, including oil and grease, “total suspended solids” and pH. They rarely limit pollutants such as mercury, selenium, and arsenic. And with a lack of federal guidelines, many states don’t set their own permit limits for these toxic chemicals.
END_OF_DOCUMENT_TOKEN_TO_BE_REPLACED

Finding Arsenic in Mountain Island Lake: Even a Sixth Grader Can Do It

Just recently, sixth grader Anna Behnke found high levels of arsenic near her home on Mountain Island Lake, a drinking water source for hundreds of thousands in the Charlotte, N.C. metro area. The contamination — which exceeds EPA drinking water standards twenty-fold — comes from coal ash seepage at Duke Energy’s Riverbend power plant, which the utility announced it will decommission in April without a plan to deal with the coal ash ponds on site.

As we all know, coal ash isn’t a pretty thing. The harmful leftovers from burning coal contain toxic contaminants like chromium and arsenic, and seep into our waterways, threatening wildlife and human health all in one fell swoop.

Current testing at the Dan River Steam Station, according to the new website southeastcoalash.org, reveals levels of antimony, arsenic, iron, manganese, sulfate and total dissolved solids above state groundwater standards. That’s unacceptable — coal ash shouldn’t interfere at all with groundwater, surface water, or the waters we drink and play in. To keep coal ash at bay, the ponds of sludge located at Dan River and other sites should be properly lined and covered. END_OF_DOCUMENT_TOKEN_TO_BE_REPLACED

Answer Me These Post-Coal Questions Three

A new blog for YES! Magazine asks, “How do we get over coal?”

That’s the question many are asking in Appalachia, where coal’s contribution to the economy is wearing thin. Already, coal is less and less abundant and more and more expensive to extract. And because it harms the environment and destroys local communities, “How do we get over coal?” is a question for Appalachia’s future.

You’ll have to read “3 Lessons for Appalachia’s Post-Coal Economy” to find the “how” out for yourself, but the gist is this: Appalachia is full of organizations that are promoting sustainable business models. That means business should benefit local residents. That means looking out for the long run. That means creating an interconnected network of new industries that will avoid the problems of leaning on only one resource.

Check it out! Appalachia’s future depends on it. 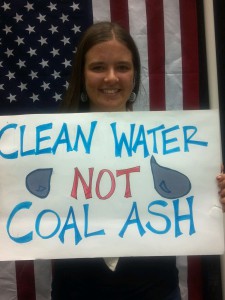 Coal ash, the toxic byproduct of burning coal for electricity, is typically stored in wet, often unlined ponds. These ponds then seep into neighboring groundwater. All across the nation, groundwater resources have been contaminated by coal ash. And as the Washington Post recently demonstrated, any protection of our nation’s waters from coal ash is being halted until after the election. END_OF_DOCUMENT_TOKEN_TO_BE_REPLACED

Perkins says that coal ash doesn’t get the hype it deserves. It leaches into our major rivers and lakes, poisons our fish and wildlife, and was the catalyst for one of the worst environmental disasters in our nations history. The fact is that coal ash is toxic: the heavy metals it contains are associated with cancer, birth defects, and other health problems.

“A person is entitled to do as they please on their property while respecting and not impacting property that is not their own,” says Perkins, raising a valid point: why are we allowing companies to pollute our waters? Clean water is our right, and why should current environmental regulations, which are inadequate and laden with exceptions for large utilities, allow utilities to plant coal ash ponds by public areas like Mountain Island Lake?