UPDATE: On January 22, the Virginia House Rules Committee passed HB 2213, which would establish a statewide moratorium on gold mining while a study of environmental and health impacts is conducted. The bill now heads to the House floor. Use this Friends of Buckingham action alert to contact House members to pass the legislation! 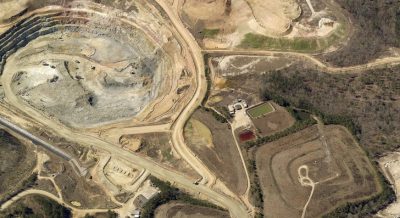 A 4,500-acre gold mine in South Carolina was noted on Aston Bay’s website as an “analogue” for what might be in store for Buckingham County, Va.

For the past several years, the gold mining industry has been drilling exploratory holes in Buckingham County, Va., unbeknownst to virtually all the community members.

Open-pit gold mining is one of the most toxic industries in the world, polluting water sources and the environment with everything from cyanide to arsenic and mercury. The geology of central Virginia includes a significant gold vein, called the “Pyrite belt” which runs through multiple Piedmont counties.

The Buckingham drilling was done in apparent violation of local zoning ordinances, and was done in part near the largely African-American community of Union Hill community which, after six long years of fighting, has finally vanquished the massive proposed dirty-gas compressor station that was part of the now-defunct Atlantic Coast Pipeline.

When word got out about the exploratory drilling in mid-2020, the Friends of Buckingham sprang into action. Thus far they have succeeded in getting the county to shut down the drilling and take a careful look at the implications of allowing open-pit gold mining.

On Monday, January 11, county supervisors and planning commissioners will hold a joint public hearing on whether to change their zoning ordinance to allow the gold mining company to proceed. 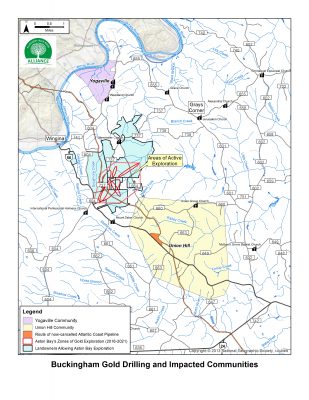 Another, major concern about the proposed gold mining operation is its certain impact on water quality on the James River, the principal source of water for the Richmond area and beyond.

Buckingham County is just the beginning of a potential juggernaut of gold mining in Virginia. Whether the county allows the industry carte-blanch to tear up the landscape and pollute water sources could set a precedent across Virginia localities.

The community is working with Delegate Elizabeth Guzman who is sponsoring a bill this General Assembly for a statewide moratorium on mining for gold and other elemental metals while a comprehensive study is conducted. Please support this effort! A bill number and more information will be posted on FOB’s website soon – so stay tuned.

In the meantime, check out the new video and other resources on their website.