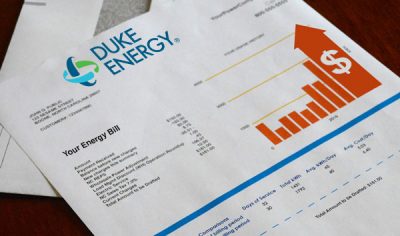 Appalachian Voices’ Summer 2020 intern Sophia Palia contributed to the research and writing of this report.

While other utilities are unambiguously moving to achieve 100% clean energy in 30 years, Duke would still get 23% of its energy from fossil gas, and rely heavily on carbon offsets and questionable carbon capture technology, as well as nuclear power to achieve its net-zero goal. Most concerning, Duke is using the plan, without revealing its cost assumptions, to try to convince decision-makers that the only affordable path to net-zero carbon emissions is to make major new investments in dirty-gas pipelines and gas-burning power plants.

Duke’s failure to move quickly to clean energy would worsen global warming, put the public’s health at risk, and hurt North Carolina families and businesses through unnecessary costs, especially for lower-income communities and people of color who bear the highest energy burden.

The report states that “climate change policy should recognize that nuclear energy and natural gas generation remain essential” in the transition to net-zero carbon emissions. But the true test is not switching from one dirty fuel to another, but switching to energy efficiency and sustainable, clean renewables like wind and solar.

Rather than a legitimate attempt to chart a course to a clean energy economy, Duke’s sham plan is an attempt to justify its illegal use of ratepayer funds to build gas-burning equipment at their coal-fired power plants, and to justify the 12,000 megawatts of additional gas-burning capacity they intend to build across the Carolinas by 2035.

Duke is lagging far behind other utilities in transitioning to clean energy in both magnitude and speed. While Duke’s goals only show renewables comprising 36% of its energy mix three decades from now, several other large utilities already obtain more than 40% of their energy from renewables.

In California, multiple utilities have made significant efforts to actively shift to renewable energy, with their current renewable energy portfolio outmatching Duke Energy’s envisioned energy resources. Other companies, such as APS and Xcel, have also committed to 100% decarbonizing without the use of offsets which ultimately allow for more use of dirty energy without addressing the real problem. MidAmerican Energy — which provides energy to states in the Midwest — currently uses 9% more renewables than Duke would use 30 years from now. 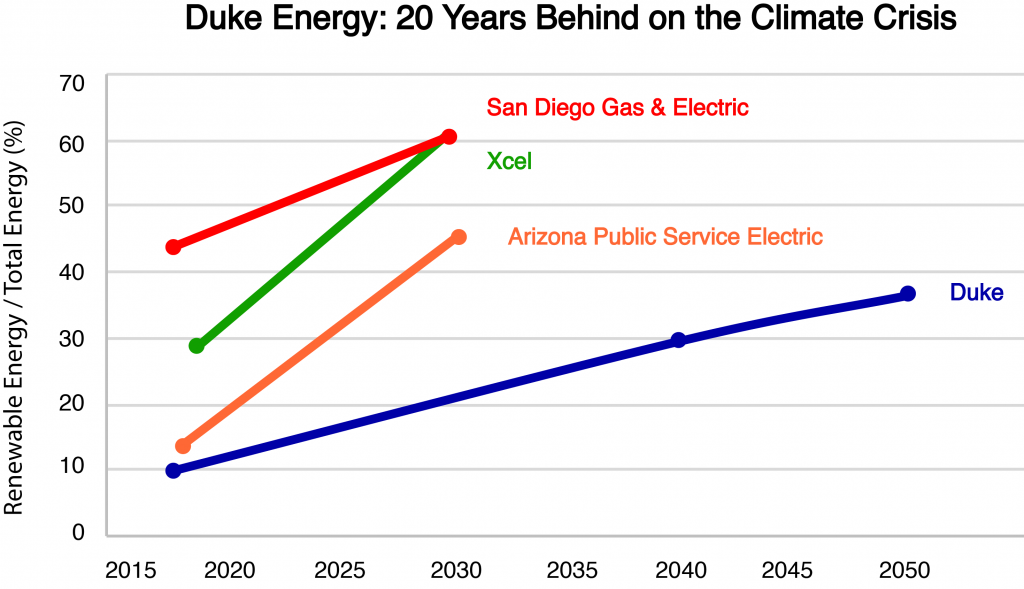 Duke Energy fails to accurately account for the advantages of renewables like solar and wind, as well as energy storage, which allow for more flexibility and efficiency when faced with the challenges of natural disasters and climate change. Instead of investing in these resources, Duke projects as much as 30% of its energy coming from speculative carbon-capture technologies and small nuclear reactors that have yet to be proven safe or cost-effective.

Duke spins its plan as the only economically attainable path to net-zero carbon emissions by 2050. However, the utility unjustifiably relies on excessively high cost estimates for renewable technologies while failing to present its assumptions about the future cost of natural gas. As a result, it’s impossible for the public to know why Duke plans to continue relying on fossil gas, especially given the substantially lower-cost estimates of other energy utilities in the U.S.

Duke’s smoke-and-mirrors climate report envisioning a build-out of fossil gas is a dangerous step backward and not the swift and complete shift to clean, renewable energy that we must pursue in order to help mitigate the crisis we are in.