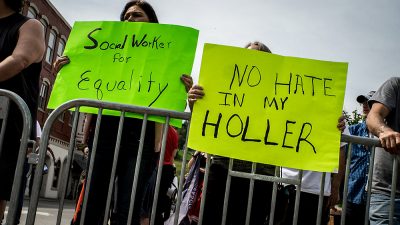 Counter-protesters hold signs during a rally held by white nationalists in Pikeville, Ky., in April 2017. The event was one of the first such demonstrations in the region this year.

The night before the Aug. 12 Unite the Right rally in Charlottesville, Va., University of Virginia student Laura Cross linked arms with several other members and friends of the Virginia Student Environmental Coalition around the campus’ statue of Thomas Jefferson with a sign reading “VA Students Act Against White Supremacy.”


They were soon surrounded by a torch-bearing mob chanting “white lives matter” and “Jews will not replace us.” A brawl broke out, according to Cross, when one of the Unite the Right marchers started throwing punches as another walked down the line of counter-protesters spraying mace in their faces.

Cross says she expected the white supremacists to incite violence at the rally the following day. But no one expected a car to intentionally ram through the crowd of counter-protesters, killing 32-year-old Charlottesville resident Heather Heyer and injuring 19 others. Two state troopers were also killed when their helicopter crashed while monitoring the event.

Six members of the Virginia Student Environmental Coalition were hospitalized with skull fractures, concussions or other injuries in the car attack, which U.S. Attorney General Jeff Sessions labeled as domestic terrorism. One student’s leg was broken so badly, doctors initially feared she may not be able to walk again. Several students received death threats and intimidating phone calls in the weeks after.

Don Gathers is deacon of the First Baptist Church in Charlottesville and former chairman of the commission that voted to move the statue of Robert E. Lee in May, which touched off the events. He says the Charlottesville rally was “the worst demonstration of — I believe as Dr. King put it, ‘man’s inhumanity to man.’”

“It just wasn’t anything that I expected to see up close and personal in my lifetime, and I pray that my children never have to see,” Gathers says.

In an email following the events, Appalachian Voices, the publisher of this newspaper, said, “we commend the local, state and federal elected officials who have called the nation’s attention once again to the destructive legacy and present reality of racism, and pledge to hold our leaders accountable to ensure their actions match their words.”

“Racism never went away in this country, though many wanted to pretend it had,” Cotten says. “If you don’t treat a wound, it festers. … We need to be having the hard conversations regularly — you can’t hold a rally or a vigil without also creating space for communities to come together in the long term to do the work of addressing the root of systemic racism in our communities and lives.”

Rev. John Butler, president of the NAACP branch in Knoxville, Tenn., says that seeing rallies like the Aug. 26 Knoxville demonstration, where counter-protesters outnumbered white supremacists 70-to-1, is very encouraging. But, he asks, what happens after the rallies?

“We have to be proactive continuously,” Butler says. “It’s like cleaning up your house — you’ve got to just constantly clean it. Because if you don’t, one day you may have some things in your house that you don’t want in your house. And then you see those things and all of a sudden you want to clean it all up, but it didn’t get that way overnight.”

The Alliance for Appalachia, a coalition of organizations including Appalachian Voices that oppose mountaintop removal coal mining, released a statement in September condemning white supremacy and committing to push back against it in the region.

“The Alliance for Appalachia stands with the many across our region who are demonstrating against racist hate,” the statement reads. “We are engaging in meaningful dialogue with our friends, neighbors, and family members about the threats posed by white supremacy, and we are working to liberate ourselves from our own internalized racism and other manifestations of oppressive thinking and behavior.”

According to Laura Cross with the Virginia Student Environmental Coalition, effectively combatting racism means the community organizers who are upper-middle class need to get out of their comfort zone and reach out to “people [who] are experiencing a different kind of economic situation.”

Alice Beecher, an independent community organizer in Whitesburg, Ky., notes that media coverage has “a long history of scapegoating Appalachians” for the systemic racism in the country.

“I think there’s a lot of misconception in the media of who’s here, who isn’t here,” she says. “I see a lot of people here who are trying to resist the spread of racism in our hills and hollers.”

Since the events in Charlottesville, unrest has continued to ripple across the country with rallies and counter-protests continuing well into the fall.