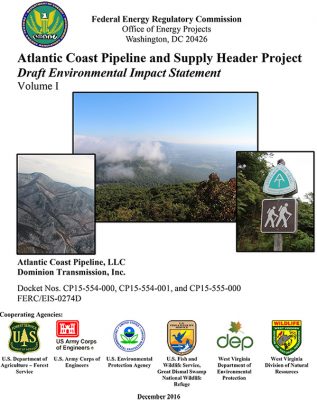 The Federal Energy Regulatory Commission released its draft environmental review of the proposed $5 billion Atlantic Coast pipeline last Friday. As we suspected, the agency ignored evidence that the 600-mile pipeline, spearheaded by Dominion Resources, is not needed and puts lives, communities, drinking water and the climate at unacceptable risk.

>> Appalachian Voices will soon set up an action alert to help citizens send comments to FERC during the public comment period, which ends April 6. << The project has sparked fierce opposition in the past two years from hundreds of landowners in Virginia, West Virginia and North Carolina — including farmers, business leaders, Native American tribes and rural African-American communities — who reject the company’s plan to take their land without their consent. Their fight has drawn comparisons to the ongoing citizen-led resistance at Standing Rock against the Dakota Access Pipeline, and to the fight in Nebraska to stop the Keystone XL Pipeline. The Atlantic Coast project would pump fracked gas across the three states, harming communities, water resources, private property, historic sites, and iconic public treasures including the Blue Ridge Parkway and Appalachian Trail. Environmental groups disappointed with the review say FERC failed to honestly assess these impacts and disregarded evidence that the project would lock consumers into decades more reliance on dirty fossil fuels.

An independent study shows there is enough existing gas supply in Virginia and the Carolinas to meet consumer demand through 2030 — negating the need for the massive pipeline and the harm it would trigger. The Atlantic Coast Pipeline is one of six major pipelines proposed for the same region of West Virginia and Virginia, where experts warn the gas industry is overbuilding pipeline infrastructure. However, FERC ignored this evidence in its draft Environmental Impact Statement while also failing to assess the cumulative effects of the pipelines. The groups also fault the agency for dismissing clean energy alternatives.

In response to requests from numerous elected officials and organizations, FERC has extended the usual 45-day period for public comments; the deadline is April 6, 2017.

While legal and environmental experts are continuing to review the document, they have initially identified major gaps in FERC’s analysis, including:

Citizens along the route of the Atlantic Coast Pipeline — along with landowners in the path of the Mountain Valley Pipeline, a 301-mile fracked-gas project proposed in the same region — vow they will continue to build resistance to stop them.