Industry’s decline produces a political shakeup in the Bluegrass State 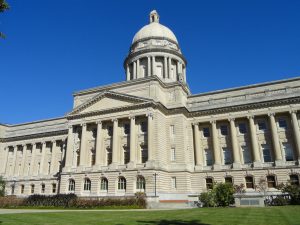 With the challenges facing coal in eastern Kentucky, it remains to be seen how the industry will maintain its political power in the state. Photo of Kentucky State Capitol via Wikimedia Commons.

The final months of 2015 may prove to be a historic moment for Kentucky’s politics and the state’s struggling coal industry.

When Governor Matt Bevin took office at the beginning of December after a surprise victory over Democratic challenger Jack Conway, he took a brazen shot at environmentalists by appointing former coal executive Charles Snavely to oversee the state’s environmental protection cabinet. Snavely was an executive with International Coal Group (ICG), a company that Appalachian Voices, along with allied groups, sued for covering up thousands of water pollution violations in the state.

To make matters worse, state Representative Fitz Steele was appointed this week to chair the House Natural Resources and Environment Committee, after Representative Jim Gooch switched to the Republican party earlier in the week. House Speaker Greg Stumbo greeted the move with this statement: “Rep. Steele has built a strong reputation as a defender of sensible environmental laws and is an excellent choice to lead this committee as we ready for the legislative session.”

Stumbo’s statement is perplexing; back in 2012 Fitz boasted that he “can take [a mountain] down and put it back better than what it is.” If that view of mountaintop removal coal mining is what Stumbo thinks is a “sensible environmental law,” then we really are in trouble.

But it’s not as if Steele is all that different from Jim Gooch, the man he is replacing. For example, here’s Gooch’s statement from Monday on why he left the Democratic Party: “Let my departure from the Democrat Party send a message loud and clear. I stand behind the thousands of Kentuckians who have lost their jobs all across the coalfields.” This is coming from a man who blames impoverished eastern Kentuckians for their water problems, rather than mining companies and coal executives like Charles Snavely.

Gooch’s departure — as well as Bevin’s election win — are hardly surprising if we are to look at West Virginia. In that state, large numbers of Democrats have either left the party or have been voted out, due in part to the industry’s “war on coal” campaign. It has become increasingly clear that this campaign was an incredibly cynical crusade to consolidate political power in an uncertain market environment. The political realignment of West Virginia — and now Kentucky — is proof of that.

As the Bevin administration moves into its first year, and as Central Appalachian coal prices continue to fall, it remains to be seen how the coal industry will maintain political power in the state. However, if recent developments serve any indication, we can almost guarantee that elected leaders in Kentucky will continue using “war on coal” rhetoric to exploit the fears of many, while ignoring the very real issues of clean energy, healthcare access, low wages and environmental catastrophe.