The agreement is notable not only for the large penalty imposed, but also because it effectively bars Frasure Creek from further mining in Kentucky. It also marks a welcome, if uncommon, collaboration between clean water advocates and state regulators. The settlement was crafted through cooperation between the Kentucky Energy and Environment Cabinet, citizens groups — including Appalachian Voices, Kentuckians For The Commonwealth, Kentucky Riverkeeper, the Sierra Club, and Waterkeeper Alliance — and Frasure Creek. 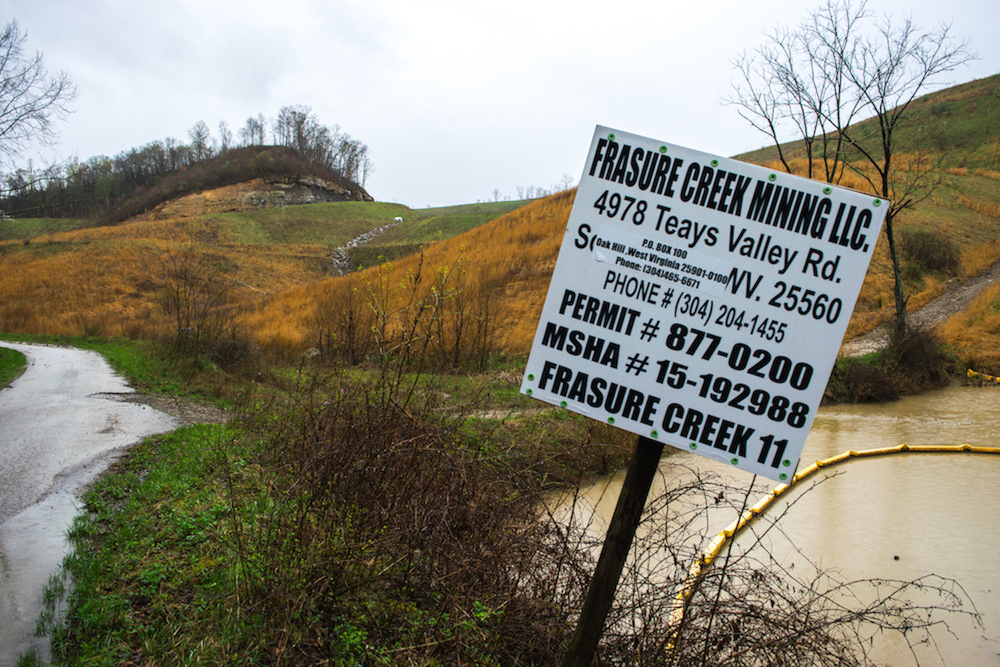 The settlement includes a total potential penalty of $6 million – the highest environmental fine ever levied against a coal company by the Kentucky cabinet. Frasure Creek will not have to pay the fine, however, as long as it does not mine in the state. Regardless of whether the company hopes to ever mine coal in Kentucky again, the settlement requires Frasure Creek to admit to its violations and immediately pay $500,000. If Frasure Creek fails to pay the $500,000, it will be liable for the full $6 million fine.

During the course of settlement negotiations, Frasure Creek transferred its remaining Kentucky mining permits to Liberty Management. The mines were no longer producing coal, but were in the process of reclamation and still had active Surface Mining Control and Reclamation Act and Clean Water Act permits.

If at some later point Frasure Creek or its owners wish to apply for new permits, they must first pay $2.75 million before their mining application will be processed by the state. Essentially, the settlement requires Frasure Creek to either leave the state of Kentucky for good or pay a fine sufficient enough to deter it from returning to its illegal practices.

Though this settlement arose out of a notice of intent to sue sent in 2014, the story begins a half-decade earlier.

This pattern made it clear that ignoring regulations is common in the coal industry. In another case of falsified water pollution reporting, a lab employee of Appalachian Labs in West Virginia pleaded guilty to conspiring to violate the Clean Water Act. The lab conducted sampling at more than 100 mine sites in West Virginia. At least four different water-testing labs were involved in the duplicate data cases in Kentucky.

When we first discovered the duplicate reports at ICG and Frasure Creek, we took steps to file a citizens’ lawsuit against the companies under the Clean Water Act. The Kentucky Energy and Environment Cabinet filed its own case against the companies in state court, effectively preempting our case. We intervened in the state’s case to ensure diligent enforcement by the state — a right of citizens that was ultimately upheld by the Kentucky Supreme Court.

In 2011, we filed an additional suit against the companies for permit limit violations that arose when both companies began reporting more accurate data. State officials once again preempted our case, but this time the cabinet filed its case in the Kentucky Office of Administrative Hearings. The cabinet and Frasure Creek then entered a slap-on-the-wrist settlement, over our objections and despite our right to intervene in the case. That settlement was thrown out last year on the grounds that it violated our due process rights. The cabinet has appealed that decision.

In 2014, Appalachian Voices again discovered that Frasure Creek was duplicating DMRs, this time with a different water testing laboratory. Once again, the cabinet failed to identify the problem until we filed a notice of intent to sue over the violations. This time, when the cabinet filed a case in its administrative court, we were granted intervention and allowed much more input in the settlement. The result is the historic settlement filed earlier this week. 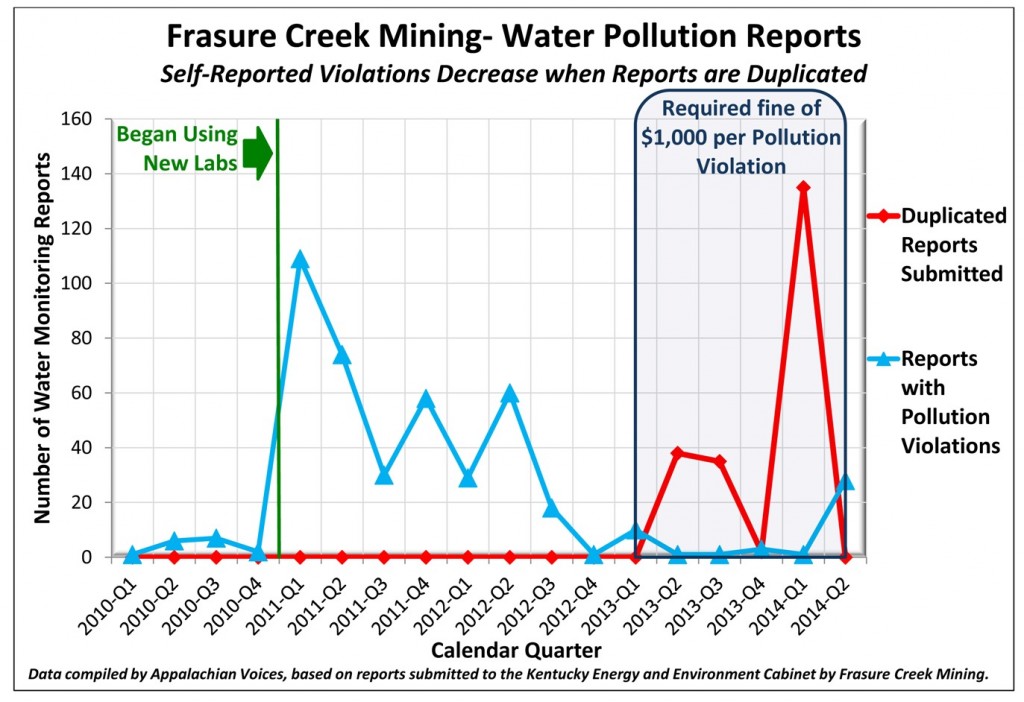 Finally, not only did the cabinet allow meaningful citizen input, it pursued an enforcement action that may actually be strong enough to prevent this problem from happening again, at least with Frasure Creek. Unfortunately, the settlement was entered on the last day of Governor Steve Beshear’s term and the progress we made with the Beshear administration is not guaranteed to continue during Governor Matt Bevin’s time in office.

It is too early to determine how friendly the new Bevin administration will be toward coal companies that flout regulations, but there is already reason to be concerned. Former Gov. Beshear appointed Len Peters as Secretary of the Energy and Environment Cabinet. On paper, Peters had many of the right credentials for the position — he is a scientist and an academic with broad experience working for universities, nonprofits and the federal government. Despite these qualifications, under his leadership, the cabinet still routinely allowed coal companies and other industries to violate environmental regulations with minimal consequences.

In contrast, Bevin’s appointment for cabinet secretary, Charles Snavely, spent the past three decades climbing the corporate ladders at several major Central Appalachian coal companies. Last I checked, the Energy and Environment Cabinet includes not just the division of mine permits, but also the divisions of water, air quality, and renewable energy, among others. Apparently running a company in one of the dirtiest industries in the county now qualifies you to protect communities and ecosystems from that industry, in Kentucky at least. 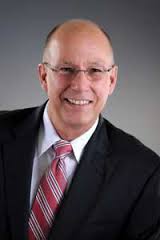 It gets worse. Not all coal companies are equal. While I would argue that no surface mining coal company in Kentucky is particularly good for Kentucky, some are worse than others. Snavely has worked for both Massey Energy and Arch Coal. In September 2010, he was named the executive vice president of mining operations at ICG.

That’s right — when Appalachian Voices and our partners sued ICG for falsifying DMRs, Snavely was a member of the company’s senior management.

According to news reports, at the time, he was responsible for “all ICG mining operations and corporate oversight of safety and compliance performance.” Before this, when Snavely was just a run-of-the-mill vice president at ICG, 12 miners were killed in an explosion at ICG’s Sago Mine in West Virginia. Family members of the victims claimed the mine had violated safety regulations. In 2011, ICG settled a wrongful death suit.

Despite the current decline in the coal market in Central Appalachia, Governor Bevin seems just as beholden to the industry as many politicians who have preceded him. But appointing an industry insider to regulate the industry will not be enough to save it.

This settlement, and the commitment of groups like Appalachian Voices and our partners to bring polluters to justice, demonstrate to the new administration that citizens will hold the state accountable. But it’s not clear that Governor Bevin is getting the message. During his campaign, Bevin courted the coal industry and criticized the U.S. Environmental Protection Agency. In October, at the height of the campaign, Bevin even chastised his opponent for saying coal can be done “cleaner.” If he had any downtime on his inauguration day, we hope Bevin read the news.

Coal is rapidly declining in Central Appalachia. But that does not mean the industry, or its influence, will disappear anytime soon or that enforcement of environmental regulations around mining will become any less important. If anything, the thin economic margins of coal companies operating in Central Appalachia today provide an incentive to break rules intended to prevent negative impacts on water, land and communities. As the region envisions a new economy that is not dominated by coal, oversight of mining’s impact on the region is as important as ever.