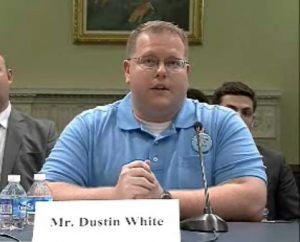 Dustin White of the Ohio Valley Environmental Coalition testifies before a House Subcommittee about the impacts of mountaintop removal on Appalachian communities. The head peering over Dustin’s shoulder is that of the author.

It’s rare for Appalachians to have their voices heard in Congress.

Once every year or two, though, someone from the region gets the chance to publicly address a congressional committee about the ongoing problems mountaintop removal coal mining is causing in our region.

Coal industry advocates would probably like to eliminate those occasions all together, but so far they’ve only succeeded in making them uncommon.

In the past month alone, Appalachians have testified about mountaintop removal mining at two different U.S. House hearings. The coal industry lobbyists must be getting sloppy.

Dustin White, a community organizer with our allies the Ohio Valley Environmental Coalition and an 11th generation West Virginian, testified recently before the House Subcommittee on Oversight and Investigations. Subcommittee Chairman Louie Gohmert (TX-1) wanted the hearing to be about how the Obama administration has ignored states during the writing of the Stream Protection Rule. For him, the hearing was about that.

But for Dustin and for us, the hearing was about the need for the federal government to help put an end to mountaintop removal coal mining.

“We will continue to go to the federal agencies as long as the state agencies ignore us, and our lives and homes are threatened by mountaintop removal …”

How can state regulatory agencies honestly be expected to be part of a federal rulemaking process when they have proven time and time again that they cannot perform their jobs to protect citizens from mining pollution. People living in mountain communities are experts in their own lives, and know practices like mountaintop removal are harmful and want action taken.”

A week before Dustin was heard, Dr. Michael Hendryx testified before the House Subcommittee on Energy and Mineral Resources. Dr. Hendryx is the foremost expert on the human health impacts related to mountaintop removal mining in Appalachia and he has led dozens of studies on the issue. He took full advantage of the opportunity (accidentally?) afforded to him and briefly explained his findings.

“Our research has shown that people who live near mountaintop removal are at higher risk, compared to people living farther away, for a wide set of health problems. We see, for example, that rates of lung cancer are higher in the mountaintop removal communities. We have also found higher death rates from heart disease, lung disease and kidney disease.

The increased mortality in mountaintop removal areas translates to approximately 1,460 excess deaths every year compared to death rates in other parts of Appalachia. In these estimates we have controlled statistically for other risks such as age, smoking, obesity, poverty and other variables; our results are not due to higher rates of smoking, for example, or higher poverty rates. We find that the most serious health problems are present where mountaintop removal is practiced relative to areas with other types of mining or no mining”

The Energy and Mineral Resources subcommittee hearing was about H.R. 1644, or “The STREAM Act,” which would stop the Stream Protection Rule from being written, thus taking away one of the Obama administration’s greatest tools for ending mountaintop removal. Scientists shy away from commenting on policy and legislation, as it can be a bit of a risk for them personally. He continued:

“The Stream Act in my view is an unnecessary delay and a threat to human health. Instead, I call for the complete enforcement of existing stream buffer rules, or stronger rules that the [Office of Surface Mining] may put forth, to prevent the dumping of mining waste into streams.”

Dustin White did not change the mind of Rep. Louie Gohmert, who at one point went on a long “war on coal” tirade. Dr. Hendryx was the subject of entirely unprofessional and disparaging remarks from Rep. John Fleming (LA-4) during his appearance. But that’s to be expected. It only makes me admire Dustin White and Michael Hendryx more. Not just for putting up with it, but for handling themselves with strength and grace.

Help yourself be heard. Let everyone know that mountaintop removal is still happening, it is wrong, and tell President Obama it must be stopped.