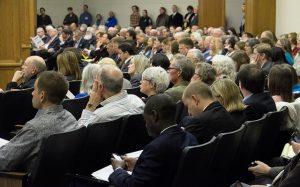 As he called the Joint Commerce and Labor Committee to order Wednesday in Richmond, state Sen. John Watkins told the the audience of more than 200 citizens that the purpose of the meeting was to allow legislators to better grasp the U.S. Environmental Protection Agency’s Clean Power Plan and its likely effects on Virginia’s economy and energy prices.

That is all well and good, but for the fact that the the slate of presenters was stacked by the likes of the industry-biased Virginia Center for Coal and Energy Research and coal-heavy electric provider Appalachian Power. Aside from a lone environmental advocate, representatives from the electric utilities and entities friendly to polluters dominated the three-hour hearing, repeating the myths and misinformation that the EPA plan would increase costs for ratepayers and trigger job losses.

But the General Assembly members could not fail to notice just how many Virginians took the time to be there to watch and listen, and how passionately they care about shifting to clean energy. A large group activists and clean energy supporters rallied outside the Capitol to make our voices heard: there is no time to lose for Virginia to harness renewable energy and energy efficiency. They cheered the EPA’s proposed carbon pollution limits as a historic opportunity to adopt the policies that will turn the commonwealth to a cleaner energy future. 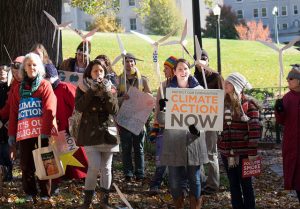 Amid the spirited and diverse groups at the rally were moms and kids having a play-in for the earth, Green Grannies leading the crowd in song, and students who waved model wind turbines aloft in the wintry breeze. The point was clear. Rejecting the biased and flawed assessments that industry presenters made in the committee room, speakers at the rally heralded the benefits to public health and the obligation that Virginia has to be part of climate solutions. These sentiments are reflected in the more than 200,000 petition signatures from Virginians support of strong EPA climate action.

The speakers highlighted how the option to offset power plant emissions with clean sources and efficiency will drive job creation and eliminate the need for new natural gas plants, and stressed that costly nuclear power investments are not needed if Virginia can take advantage of offshore wind and ramp up programs to make homes and businesses energy-efficient. Virginia has enough wind and solar energy to power hundreds of thousands of homes in the next decade — IF the legislature and McAuliffe administration act now and incorporate EPA’s Clean Power Plan as part of a statewide strategy. 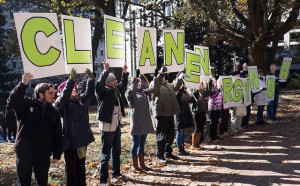 Wednesday’s events brought Virginia activists together around a shared vision of Virginia 15 years in the future that is less reliant on fossil fuels, a vision that the EPA plan can help bring to life. Others voiced concern at the rally that the two large natural gas pipelines proposed for Virginia are not the way to go, given the dangers to clean air and water and the impacts of carbon dioxide and methane on the climate.

Our movement spanning Virginia is strong in its diversity and united by a desire for a clean energy future. Until the EPA’s rule is made final in June of 2015 and far beyond it, we’re fighting for clean power. As we chanted Wednesday at the Capitol, “There’s no stopping us until we’ve won.”