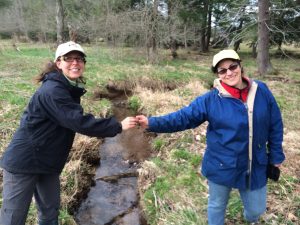 Citizens work to restore West Virginia’s historic forests, which were once dominated by the towering red spruce. Photo courtesy of The Nature Conservancy.

After a hike up a mountain, Andrea Brandon gently places a red spruce sapling into the rich West Virginia soil. Though only twelve inches tall, this small tree and others like it are a promising start to the restoration of an entire ecosystem.

As the central Appalachians program coordinator for The Nature Conservancy, Brandon splits her time between field work, paper work and teamwork. For the past three years, she has headed the Central Appalachian Spruce Restoration Initiative, a collaborative group of stakeholders that formed in 2007 to protect and restore central Appalachia’s high-elevation red spruce ecosystems.

Originally from Michigan, Brandon began working with The Nature Conservancy four years ago on invasive species management. Her decision to switch her focus to the red spruce ecosystem was driven by observing how “a lot of the history of the region … is tied to [the] high elevation forests.”

Before European settlers arrived, the forested hills of West Virginia were dominated by red spruce trees. Today, only five to ten percent of the area once covered by that high-elevation ecosystem remains in the Mountain State, and similar statistics are true for all of central and southern Appalachia.

Logging and uncontrolled wildfires associated with the incoming railroad during the late 1800s and early 1900s devastated the red spruce population and its seed source, and even stripped the soil down to the bedrock in many areas.

Brandon’s main work is reestablishing and bolstering these red spruce communities, which are home to 240 rare plant and animal species. Since 2007, CASRI has restored 1,500 acres of central Appalachian land to its original red spruce ecosystem. According to Brandon, “It’s about the tree, but it’s much more than the tree. We are really trying to restore the functioning aspects of the ecosystem.” This means planting spruce trees and other associated native plants such as serviceberry, yellow birch and wild raisin, as well as working with other organizations involved in red spruce restoration such as the U.S. Fish and Wildlife Service and CASRI’s sister organization, the Southern Appalachian Spruce Restoration Initiative.

Brandon also makes spaces in the canopy for spruce trees to receive more light and grow to be more robust, a process known as spruce release. Being a shade-tolerant tree, the red spruce can grow for decades under the canopy of larger trees and only stand two feet tall. By removing trees, especially diseased ones such as beech trees infected with the invasive beech bark disease, restoration efforts can multitask, making room for the spruce and containing disease spread.

In the words of Andrea Brandon, “It feels good to put a tree in the ground,” so check out one of CASRI’s biannual tree planting days. Visit their website at restoreredspruce.org.