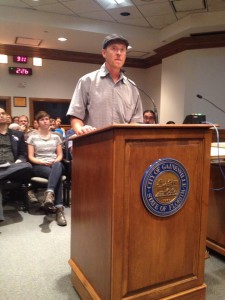 At a time when Congress can’t seem to conduct even routine business and nearly half of the country still denies climate change, that old Margaret Mead quote, “Never doubt that a small group of thoughtful, committed citizens can change the world; indeed, it’s the only thing that ever has,” can seem a little quaint and dated, if not hopelessly idealistic.

But earlier this month, a group of citizens in Gainesville, Fla., proved the truth of those words. Because of the heroic efforts of a small group of citizens, Gainesville became the first city in America to enact a policy to curtail — and possibly eliminate altogether — its reliance on coal from mountaintop removal mines in Appalachia.

A cheer went up in the packed city hall chambers when the city commission voted 5-2 for a policy designed to break the city’s longstanding reliance on coal from mountaintop removal mines in Appalachia to power its electric grid. This victory was the culmination of three and a half years of work that included five hearings by the city commission, hundreds of hours of volunteer work, and dozens of meetings with city commissioners.

The policy’s passage, championed by city commissioner Lauren Poe and supported by three Democrats and two Republicans on the commission, proved that bipartisanship is still alive in some corners of the country and that democracy can still work the way it was intended to; responsive to the will of citizens instead of just private interests with the power to make unlimited campaign contributions.

At the hearing on Sept. 18, staff of Appalachian Voices gave commissioners a virtual tour of some of the mountaintop removal mines that had supplied coal to Gainesville in the past. Suppliers included the Samples mine in West Virginia, which the late Appalachian hero Larry Gibson fought for decades to prevent the destruction of his beloved Kayford Mountain. Another supplier was the nearby Twilight Surface Mine, which was responsible for turning the community of Lindytown into a ghost town, as The New York Times powerfully eulogized in this 2011 story.

Use the arrows on the slideshow below to see excerpts of the presentation Appalachian Voices shared with the Gainesville City Commission:

There are no mountains within 100 miles of Gainesville. So how a group called Gainesville Loves Mountains became one of the city’s most active and influential advocacy groups is an interesting story.

The group’s founder, Jason Fults, first became aware of mountaintop removal as a student at Berea College in eastern Kentucky. After graduating and moving back to Gainesville, he was horrified to learn the local power plant operated by Gainesville Regional Utilities, the Deerhaven Generating Station, was purchasing most of its coal from some of the biggest and most destructive mountaintop removal mines in Appalachia.

But Jason didn’t stop with being horrified; he resolved to do what it takes to break Gainesville’s connection to mountaintop removal, and he found others willing to makes the same commitment. Three and a half years later they succeeded — or at least they’ve come very close. But the battle is not over quite yet. The policy enacted by the city ensures that Gainesville Regional Utilities will not purchase coal mined using mountaintop removal as long as it has bids from other types of mines that are not more than 5 percent higher than bids from mountaintop removal operators. 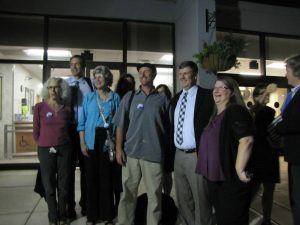 The big question is whether other cities can follow Gainesville’s lead. The short answer is that some can, though there are not many other cities served by a municipally-owned utility that operates its own coal-fired power plant and buys coal from Central Appalachia. There are a few such examples — the city of Orlando, Fla., for example — but folks who are customers of private investor-owned utilities or municipal utilities that purchase power from investor-owned utilities will have a very different challenge on their hands if they want to ensure companies like Duke Energy, American Electric Power or Dominion Resources stop purchasing coal from mountaintop removal mines.

The good news is that the city of Gainesville paved the way by coming up with a thoughtful and substantive policy that also provides some protection to ratepayers. That’s important because utilities have successfully used scare tactics about the potential for increases in electricity prices to defeat every previous attempt to pass bills banning the use of mountaintop removal in states like North Carolina, South Carolina, Georgia and Maryland. Even the students at the University of North Carolina in Chapel Hill were unable to get a policy passed to ban purchases of mountaintop removal coal from the power plant on campus because of the scare tactics employed by the operators of the plant.

Fortunately, the Gainesville policy provides a model that should alleviate those fears, and we can hope that students at UNC and Michigan State University, where local power plants are still purchasing mountaintop removal coal, will try again now that the City of Gainesville has led the way.