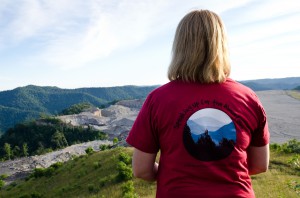 Amy Adams of Appalachian Voices looks over a mountaintop removal mine visible from Kayford Mountain, W.Va. Photo by Lynn Willis.

Appalachian Voices wishes to thank Lynn Willis and Southwings for their generosity and dedication in helping us bring these photos and stories to you.

It’s the 4th of July, and photographer Lynn Willis and I are traveling the long road along Cabin Creek in West Virginia that leads to the Stanley Heirs Park. Empty coal cars line the roadside, waiting for the next delivery of toxic payload to be delivered into their iron bowels. We pass under a coal chute and the road turns to gravel. Arriving at the park, a scattering of Appalachians, friends, family, musicians, and lovers of mountains are meeting in a small field at the 10th annual Kayford Mountain Music Festival to raise awareness of mountaintop removal coal mining. Just out of sight, the mines surround us, offering silent witness to the gathering here in opposition against them.

According to the National Mining Association, “Mountaintop mining accounts for approximately 45 percent of the entire state’s coal production in West Virginia.” Much of the political and regulatory power is held by large, out-of-state (or even out-of-country) corporations who give themselves monikers like Patriot Coal and Freedom Industries, trying to invoke a sense of pride and American entrepreneurship while subversively implying that being against them would be un-American.

But there is nothing patriotic about what the coal industry does to the land and the people. This is a monarchy, and King Coal rules with an iron fist.

Independence Day weekend, and West Virginia is NOT the land of the free.

This is a land of exploitation, where people are collateral damage, imprisoned by the politics of coal. The blasting away of mountains poisons streams and groundwater, and sometimes even alters the hydrology such that water retreats miles underground and is unreachable. Residents must buy water and carry it home, creating a financial and physical hardship. Water from the tap, if it provides any, may be discolored, have odors, or even more disturbing, may contain contaminants that silently, slowly poison the body. 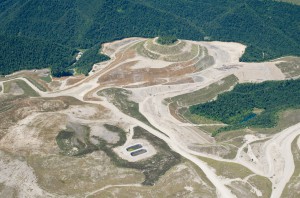 A family cemetery sits on a knoll amidst the destruction of open mines. Photo by Lynn Willis; flight by Southwings.

The endless blasting sends dust, ash, and coal particles into the air, and shakes nearby houses to their foundations, while heavy trucks and rail cars endlessly transport the prize of coal past once thriving coal communities. What the coal companies call “overburden” – the unwanted soil and rock that used to be the mountain top above the coal seams–is pushed into adjacent valleys and graded into artificial slopes whose shape reminds me of the folded paper fans I use to play with as a child.

The U.S. Environmental Protection Agency estimates that more than 2,000 miles of stream have been buried under valley fill or severely poisoned. With every rain and snow, water washes over the exposed rock, picking up a stew of toxic metals, like selenium, mercury, lead and arsenic, which are carried downstream for miles, killing fish and other aquatic life. This contamination has lead to serious health consequences for people living near mountaintop removal sites. Many of the mining chemicals and byproducts are known carcinogens, such as arsenic. Higher rates of cancer, cardiovascular disease, and birth defects have been reported. Long has King Coal been a cruel ruler.

Independence Day weekend, and West Virginia is undoubtedly the home of the brave.

The Kayford Mountain Stanley Heirs Park is home to one of the heroes of the movement to end mountaintop removal mining, the late Larry Gibson. On stage, the local musicians’ songs echo down the hills, haunting and beautiful. On Friday evening, Patricia Ansley sings a cappella a song in tribute to Larry, and for Larry, and for so many others who passed from this world before the fight was won. The melody unfolded before me in a feeling of loss, and hope. My heart opened and wept with them. Wept for the mountains and people, wept at the seemingly insurmountable odds stacked against them both. As Patricia left the stage, desperately trying to keep her own tears at bay, she hugged my neck, mostly I think because I was the closest to her as she exited the stage, but whatever the reason, I found it hard to let go.

What a perfect tribute to those who pioneered and carried this fight until they could carry no more, and a tribute to those dedicated and passionate folks left behind who have picked up and carried the torch. To find the next generation of brave mountaintop-removal fighters, you need look no further than Paul Corbit Brown, Elise Liegel, or the Mullinses, a Kentucky family whose “Breaking Clean Tour” led them up and down the eastern seaboard this summer spreading the truth of the tragedy occurring in Appalachia. 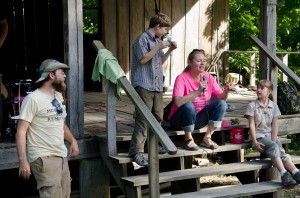 Elise Keaton, with Keeper of the Mountains Foundation, with festival-goers at the 10th annual Kayford Mountain Music Festival. Photo by Lynn Willis.

Later that evening, Trish Bragg, a pioneer of the movement, reads the thoughts she penned after seeing the Agony of Gaia. Her white hair is highlighted by the glow of the projector screen behind her, a shawl wrapped around her shoulders to keep off the cool mountain evening air. Again, it is hard to contain the emotion and as she wipes away tears in the fading light of July 4th, I feel the heartbreak written in her words. After, we watch the trailer for Moving Mountains, a dramatization of the fight she and others have waged against this devastating form of strip mining. Everyone in the small park is united and silent under the stars of a West Virginian night.

The next morning, Lynn and I join Tom White at the Charleston airport. A volunteer pilot with Southwings, Tom has flown many others over the scenes of mountaintop mining destruction over the years. Initially, I am enthralled with the joy of flying when my eyes are drawn to the unnatural looking patches of light brown in the deep green of forested ridges. And there isn’t just one or two. As far as my eyes will let me see into the horizon, there are more.

We approach one sprawling patch, and as I absorb what I am seeing, the reality of mountaintop removal mining pulls the air from my lungs and collapses my chest in. I
have that panicked feeling, like seeing an animal about to be hit on a highway. It is ugly and terrifying and nearly beyond any description by words alone. As we fly over site after site, it’s like being in an endless car wreck, and I am ready for the flight to end. We land in silence, stunned and disgusted with the truth we had brutally encountered. Returning to Stanley Heirs Park, Lynn and I climb once again the long road with new awareness and a heavier heart.

Everything is at stake for these people — their homes, their water, their food, their health, their very lives hang in the balance of the People vs King Coal. Yet looking around the park, the smiles, warmth, solidarity and camaraderie shine like embers. I see in these faces the flames of the keepers, the sense of pride and determination that have always been their strength. I see true patriotism, loyalty to homeplace and community. I am drawn to their spirit and find myself humbled by the fight they have undertaken.

Food, water, music and fellowship is shared without reserve with everyone at Kayford Music Festival, and many, many stories. Boy, do West Virginians like their stories! A man in his 80s, known to me only as Hoot, tells of the days of a one-room schoolhouse, productive family farms, and a thriving community. Later, I can only find remnants, like the goldfish pond that used to sit below the mine’s clubhouse, now just an overgrown cattail pond, and the once grand clubhouse is just a few foundation bricks in the overgrown woods. Hoot says the days last longer now, because the mountain top that used to block the fading sun no longer exists. He tells of how the family graveyard, once lower than the surrounding peaks, is now one of the highest. He talks of a natural spring that he enjoyed as a youth for drinking and playing in, where as an adult he got his water during lunch breaks…gone, now. The water no longer flows there. Everyone at the festival has had to carry in gallons and gallons of water.

Independence Day weekend, and West Virginians are building towards a new energy independence.

In a valiant, almost defiant move, this year’s Kayford Mountain Festival organizers set out to stage West Virginia’s first 100% solar powered music festival. And they achieved their goal, thanks to the coordination and generous spirit of Mountain View Solar, which provided mobile (and note: rentable!) solar panels to the site. This is a new rebellion, a new freedom, a statement of independence from the coal monarch. Practical and now economically viable, solar power is poised to create a new energy paradigm that has great economic growth potential.

In my home state of North Carolina, solar created over 10,000 jobs in 2012, and that is projected to grow to more than 30,000 jobs by 2030. The types of policies and investments that make this possible could drive the change needed to break King Coal’s stranglehold on Appalachia. The Kayford Mountain Sustainability Project aims to lead the way in that transition.

Lynn and I leave Kayford Mountain with a deep and profound connection to the people and mountains. I think a part of my heart will remain here long after I am separated by miles. Our parting view is of three white crosses on a hill. After all we experienced, it seems a sadly fitting and somehow inspiring image that demands we to continue the fight against the dirty practice of mountaintop removal mining, and demands that the years of coal’s rule end in West Virginia and her people thrive once again.