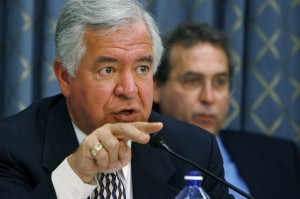 Being a member of Congress has its perks.

If I were a congressman, I think my favorite thing to do would be to have lobbyists buy me expensive lunches. My second favorite thing would be to introduce unreasonable legislation that had zero chance of ever passing. You see, our elected reps get to stand up for whatever industry they prefer, or whichever issue is closest to their heart. This Congress has only passed about 1% of the bills that have been introduced, so if a bill fails, it’s no big deal.

For example, Rep. Nick Rahall (D-WV) prefers to introduce bills dealing with issues he cares a lot about. And Rahall really, really wants coal companies to be allowed to dump their mountaintop removal waste into West Virginia’s streams. See, the Environmental Protection Agency has been issuing fewer permits for valley fills, and without those, it’s harder for mountaintop removal mines to span thousands of acres.

What’s worse, in Rahall’s eyes, is that the EPA once used its power afforded by the Clean Water Act to veto the permit for Spruce mine, a planned 2,200-acre mine in West Virginia. The plan was to bury six miles of high quality streams with more than 100 million cubic yards of coal mine waste. But then the EPA came in and determined that the mine would pose an unacceptable risk to water quality, wildlife and Appalachian communities. After years in court, the EPA’s veto authority has been upheld, and the mine has been stopped.

In response, Rahall just introduced the “Regulatory Certainty Act of 2014” to confront the EPA’s “increasing aggression against West Virginia coal mining,” and to check the agency’s “ideological zeal.” In more technical terms, the legislation would change the Clean Water Act to take away the EPA’s ability to veto a valley fill permit after an absurdly short 30-day window.

Rahall seems to believe that the EPA is running wild with these vetoes, destroying the U.S. economy in the process. But consider the following: the EPA has had veto power over 404 permits since the passage of the Clean Water Act in 1972. In the past 42 years,it has used this veto power exactly 13 times. There are hundreds of permit applications filed with the EPA every year for purposes ranging from mining to road construction, and the agency has issued a veto less than once every three years. The Obama administration has actually only used its veto authority once. Once!

It doesn’t seem to matter to Rahall that the EPA’s veto authority is a rarely used tool designated for extreme cases. The very possibility that the EPA could stop the biggest, baddest, most destructive mines from plundering Appalachia is apparently too much for him to stomach.

So. instead of standing idly by, Rep. Nick Rahall is wielding his power as a veteran United States congressman by introducing a bill to strip the EPA of its preemptive and retroactive veto power under the Clean Water Act.

The result? Another sheet of paper in a stack of hopeless bills written for political points.